Shake Rattle and Troll Outdoors" recently took possession of a 42' Grand Banks trawler. The vessel is of mid-1970s vintage and is powered by twin 135 HP Lehman diesels.

The vessel originally was being retrofitted by Challenged America to cater to physically challenged military veterans for deep-sea fishing adventures. Don McDowell, host of the 15-year running "Shake, Rattle & Troll" Radio and sportfishing editor of Arizona Boating & Watersports/Western Outdoor Times, is completing the rehabilitation of the Grand Banks and thus continuing the mission of veteran and sportfishing adventures out of the San Diego area. 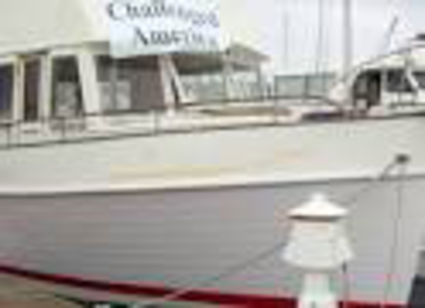 The vessel will be completed by refurbishing the wheelhouse, galley and exterior finishes, addition of navigation electronics, sonar, radar and fish finders. A bait tank and water recirculation system will be installed on the fan tail where the aft cabin and bunk rooms have been removed and redecked, allowing plenty of room for fishing.

The Grand Banks is expected to be completed and certified by the United States Coast Guard early in 2016 and be ready for the migratory tuna and sportfishing season.

McDowell currently is an active member of the United States Coast Guard Auxillary, Flotilla 10-11, District 11SR and has spent over 900 days on the saltwater on sportfishing boats as crewman, angler and Charter Master, as well as, scuba diving as a certified Dive Master.