Naples Island, one of the canal-divided islands in Alamitos Bay known as the "Venice of America," is home to Long Beach Yacht Club, which this week (September 24-27) is hosting 17 international teams who are vying for the 2015 Rolex Farr 40 World Championship title. As the closing event of a highly-competitive season, the victorious team will be the one whose athleticism, precision and teamwork come together in a fashion not unlike a Rolex timepiece: assembled with detailed precision by a master craftsman.

When the boats left the dock this morning, one of the title favourites was among the very last to leave. "Last off the dock, first across the finish," smiled Wolfgang Schaefer as he steered Struntje light out to sea. His bold claim proved strangely prescient as he would go on to win the first race comfortably. Even more surprising was the fact that the German boat won the race after only managing a second-row start next to the committee boat at the congested right-hand end of the start line. Schaefer's tactician, America's Cup and Olympic veteran Francesco Bruni, badly wanted to get to the right-hand side of the race course in the expectation of the breeze favouring that side. "We were prepared to give away distance at the start to win back time later," said Schaefer.

While Struntje light won the first race, it came at a price. "We destroyed our light air spinnaker towards the end of the race, which meant we couldn't use it for the rest of the day, and we were slow downwind. Nothing we could do about that." Such are the demands of the Farr 40, where success only comes when you put all the elements together.

Reigning world champion Alex Roepers, on Plenty, started slowly but came through for sixth in the first race. At the leeward gate Roepers was battling through the traffic alongside arch rivals from Italy, Alberto Rossi's Enfant Terrible, the 2013 Rolex Farr 40 World Champions. However, Rossi went for a gap that wasn't there and was forced to spin his boat for a second attempt, and then make a subsequent penalty spin. This error set the scene for a very difficult day for the Italians, guided by multiple champion Vasco Vascotto, who are known for their precision approach to their racing. But that precision deserted them for the start of race two when Enfant Terrible broke the start line too early. On restarting they were almost last, but it's a credit to Italian resilience, teamwork and determination that they clawed their way back to sixth by the finish; even so, Vascotto flung his hat on the deck in frustration. Lying ninth overall (16 points out of first place) after three races, it's a long way back to the top for this ambitious crew. 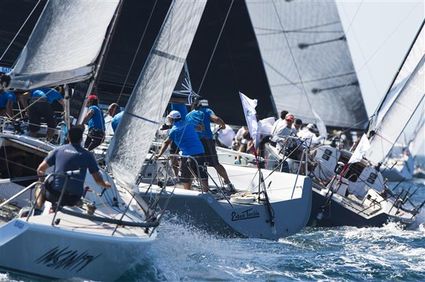 The team that just got better and better throughout the day was Flash Gordon 6 helmed by Helmut Jahn, the 2012 Rolex Farr 40 World Champion. The world-renowned Chicago-based architect, who shares steering duties with his son Evan Jahn, progressed to the top of the leaderboard with scores of 5-3-1, but refused to celebrate his success when he stepped ashore. "You can lose a regatta in one day, but you can't win it. We're going to sail tomorrow like we just started out, not thinking that we're in a special place. That's part of the excitement of the fleet, that it's so competitive, so tight."

Jahn appreciates the camaraderie of the fleet, the family atmosphere, and the sheer pleasure of working with the elements to make the boat go as fast as possible. "We work not with an engine, we work with the wind, with the waves, with the current," said Jahn. "In this sport you can't control everything, and in the Farr 40 fleet you can never count somebody out, everyone still has a chance. We've got three days to go and a lot can happen."