Congratulations to the men and women of the United States Coast Guard on your 225th anniversary. 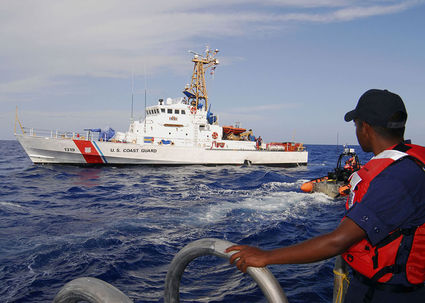 Today we pay tribute to your past. I am even more excited about your future. As your service Secretary, I have had the first-hand privilege to support and witness the recapitalization of the Coast Guard's fleet of vessels. I have experienced the excitement of stepping on board a shining new National Security Cutter. I receive daily reports of the good work the Coast Guard performs in law enforcement, maritime security and national security.

Most important, we should all be impressed by the dedication and excellence of the men and women who occupy the ranks of today's Coast Guard. None of us should be surprised, for example, to learn about the Petty Officer who recently, single-handedly, saved four stranded fishermen off the coast of Oregon.

Our young people in the Coast Guard are particularly inspiring. I have been to the Academy and seen the remarkable men and women who are graduating there, who want to join your ranks. As some of you may know, for me, the Coast Guard is also becoming a family matter.

Our future is bright. The next 225 years will be even better than the last 225. I salute you, thank you for your service, and, from this new member of the family, I wish you happy anniversary.

And From Admiral Paul F. Zukunft

To the men and women of our Coast Guard,

As our Service turns 225, we face unprecedented challenges - from violence in Central America, to increased activity in the Arctic, to the changing energy trade, and an entire new domain of cyberspace. As I engage with our Secretary, Members of Congress, the Joint Chiefs, and industry executives, it is evident that your outstanding service is directly contributing to our Nation's security and prosperity.

As I write this, 66,000 pounds of uncut cocaine are aboard Coast Guard Cutter Stratton thanks to people like pursuit coxswain BM2 Hylan Rousseau and the entire crew. Along with all those patrolling the Western Hemisphere Transit Zone, they are severing the financial supply lines of transnational criminal organizations who threaten stability in Central America and the security of our southern border and approaches.

To the far North, Coast Guard Cutter Healy conducts scientific exploration and undersea surveys on a mission of the highest national priority in the Arctic. MK2 Christopher Ford, a main propulsion division machinery technician aboard Healy, is one of many who keep this icebreaker going to assure access in our polar regions.

Closer to home, the port state control team at Sector Boston facilitates economic growth. Within a 24-hour period over the Fourth of July weekend, LT Tiea Gaudren led the response to both an LNG tanker collision and a cruise ship casualty. In both instances, her efforts preserved safety while also facilitating commerce within our Maritime Transportation System - the lifeblood of America's economic engine.

Information sharing, and the systems that enable it, are critical in all of our missions. Along with the entire team at Coast Guard Cyber Command, IT1 Val Votinov is meeting the challenges of cyberspace, paying close attention to vulnerabilities and threats in this emerging operating domain.

Finally, it is the actions of AST2 Darren Harrity, who jumped from a helicopter to pull four shipwrecked fishermen from the sea in a crashing surf zone off the Oregon coast that personifies a commitment to selfless service.

AST2 Harrity had to save each fisherman one at a time and swam more than a mile during the rescue. After the rescue, he said it was muscle that got him through it. More precisely, I wager, it was his heart.

The accounts above are just a few examples of the exemplary operations you perform each day honoring our 225-year legacy. Without question, you and your families are our most precious resource. You are shaping history as it unfolds before you. I am proud of our 225 years of continuous service, and I am honored to lead you - the 88,000 active duty, reserve, civilian and volunteer auxiliary members.

Thank you for your service in America's Coast Guard - 225 years strong.