Straight From The Farm

Retired longtime Tempe newspaper editor and writer-columnist Lawn Griffiths has published Batting Rocks Over the Barn – A Iowa Farm Boy's Odyssey. It is published by Xlibris Press, a division of Random House/Penguin Books.

The book is a collection of 72 essays derived from columns he wrote for the Waterloo (Iowa) Courier between 1972 and 1980 when he served as the newspaper farm editor/assistant state editor. The column was titled "Rural at Random."

After 12 years with the Courier, Griffiths moved to Tempe, Ariz., where he was a managing editor, daily columnist and longtime religion editor for the Mesa Tribune and sister dailies – 40 years as a newspaperman. 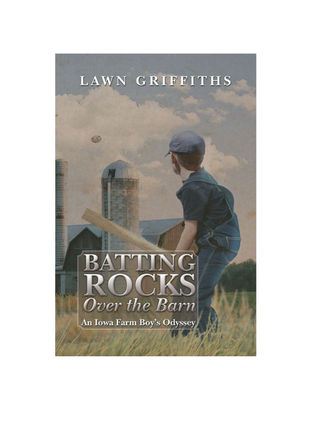 Many of the essays in Batting Rocks focus on the work and rhythm of farming. The writer acknowledges that many of the stories are about a way of farming now gone, but that anyone who lived in the countryside in the 1950s and 1960s can well remember - things like putting bales of straw around the farm house foundations for the winter or trying to keep squadrons of flies from tormenting dairy cows in summer.

"I was blessed by hard-working parents who were married for nearly 56 years," he writes. "They were devoted to the soil and the land. Besides working us kids incessantly on the farm and teaching us an extraordinary work ethic, they were robust storytellers. They certainly fostered that in this journalist."

Batting Rocks Over the Barn is available in book stores, including Barnes and Noble (both stores and Web site) and on Amazon.