Quality of life is measured by the amount of time spent fishing.'

What a great day spent learning about striped bass behavior, attitudes, and preferences. It was time well spent.

We headed out from Wahweap as the sky began to glow in the east. We made it to the mouth of Navajo before sunrise in hopes of seeing the slurping stripers encountered there previously. I am not good at waiting, so we trolled while hoping for the first slurps to appear. That went well as we caught a 3-pound striper trolling a Lucky Craft Bevy Shad at 4 mph.

As that fish was undergoing hook removal, the slurpers came up in range and we caught two more small stripers casting Lucky Craft Pointers 78 beyond the surfacing fish and then reeling back through the school.

This is where it got interesting. Stripers were coming to the top and slurping shad but there was not much schooling behavior. It was more like every fish for himself as they were feeding individually on small pods of larval shad. Two to five fish would hit the surface near the same time but we could not get to them quick enough to cast before they went down.

We knew from the previous week's experience that we could catch them trolling near the surface disturbance so we did that and hooked one or two fish each time we got close enough to the surfacing fish. We chased these fish for an hour and then moved on.

The next stop was at the intersection of the main channel and mouth of Gunsight Canyon. Here we saw widely scattered surface action. But, we knew just what to do and started trolling near the two to five fish that came to the top. Again, we caught fish when our lures were trolled close enough to the feeding fish. The difference was slightly larger fish that were more aggressive. We also caught a couple more 3-pound fish that were feeding with the juveniles.

We later discovered that shad size here was larger than downlake. After an hour, the surface action quit and we headed further uplake. Surface action ceased at 8:30 a.m. At this point we could either continue to troll or use bait in deeper water to target larger stripers. We chose to troll. At Buoy 25 another 3-pound striper was caught. Then we went to the mouth of West Canyon and trolled the shallow brushy shoreline.

We soon discovered that schools of juvenile stripers were holding at 25 feet on the breaking edge of structure that quickly declined to 45 feet. These small fish had previously been slurping on the top just as the fish we had mingled with downlake. But, at this time of day, they were holding in large schools that were easy to see on the graph.

Lessons learned included the knowledge that shad numbers were declining where stripers have been slurping for the past few weeks. Small stripers and bass could still be caught trolling and casting near surface activity. Juvenile stripers were on the surface and in shallow water but larger stripers were deeper and required a change in tactics to interact with them. 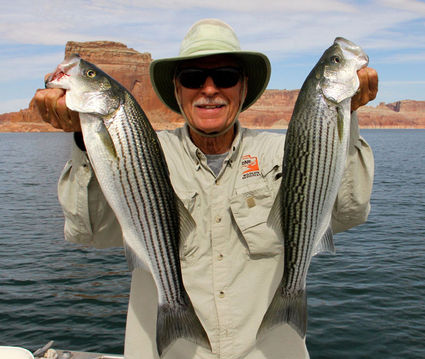 Back at the fish-cleaning station, we talked with a fishing guide and found that he had used bait after catching the small fish on top using Kastmasters. He found shaded walls near shore and dropped anchovies down 25-40 feet where bottom depth was 60 feet. His total catch was about the same as ours (25 stripers of mixed size and 5 bass). After the surface action is over trolling and bait fishing are both good techniques.

A Good Place To Fish

At press time, a productive place to fish was north of Bullfrog. There are still patches of floating debris but the water color has cleared and stripers are very active morning and evening. Bass fishing remains solid. Bluegill and catfish are active along the shallow brushy shoreline.