Other People Feeding Wildlife Believed To Be Cause

KINGMAN, Ariz. – The message has been clear and concise: stop feeding Wildlife.

The Arizona Game and Fish Department has been informing people for years about the dangers of feeding Wildlife. Last week, Mohave County Parks reported that two youths suffered minor injuries that likely were the result of elk seeking human food.

The encounter, which took place in Hualapai Mountain Park, involved a family at a picnic table. A group of elk approached the family and encircled the table. The two youths, a boy and girl, were injured by the hooves. The girl suffered a bloody nose and minor injuries to the forehead and lower leg, while the boy suffered a bump to the forehead.

"They were not feeding the animals, but this encounter was clearly the result of past behaviors of the public."" said Zen Mocarski, information and education program manager for the department's regional office in Kingman.

"The family tried to keep the table between themselves and the elk, but the elk continued to move around the family," said Brandon Oktay, park superintendent. "The park is a place to visit and enjoy, and I'm disappointed this family had to experience something like this. Those children were frightened, but the parents declined medical assistance and the injuries appear to be minor, which is the good news."

"While I'm sure the children were scared, this could have turned out worse," Mocarski said. "Elk are large, wild animals, but some people continue to treat them like pets. It is a bit disheartening to hear about the circumstances surrounding this encounter, because Game And Fish has been warning the public of the dangers of feeding wild animals for many years."

Mocarski said feeding issues in the community near the park have been severe despite warnings. In 2007, two elk needed to have trash can lids removed from their necks, which prompted the park to replace the type of lids on the cans and posted signs not to feed Wildlife.

In 2005, two deer in two days were killed by a lion in driveways within the community, which prompted Game And Fish to post warning signs. There's also the possibility of disease transmission when Wildlife exist in unnaturally high densities in such a small area. Some diseases, such as Chronic Wasting Disease, are transmitted through saliva, so feeding from the same food source can decimate herds.

In 1995, two dozen deer, apparently starving, were killed at the Grand Canyon. Following a necropsy, it was found the deer had lost their ability to digest vegetation due to being hooked on junk food. Mocarski said the common link is humans feeding Wildlife.

"The message is stop feeding wildlife," Mocarski said. "Wild animals are supposed to disperse and forage, but some people mistakenly believe the animals need assistance. Feeding Wildlife is not an act of selflessness, it's a selfish act that has now resulted in two children getting injured. This has to stop." 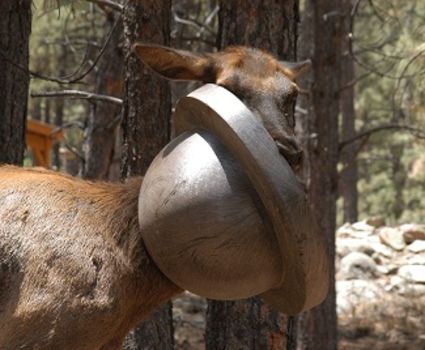 There is a statewide ordinance against feeding Wildlife, but it only applies to counties with populations of 280,000 or more, including Maricopa, Pima, and Pinal counties. The best practice for those wishing to see or help Wildlife is to plant native vegetation.

"The bottom line is that things like chips or pretzels, which are not particularly good for humans, are certainly not good for wildlife," Mocarski said. "Neither are the hay bales visible throughout the community. Allow these animals to forage naturally. They should have a natural fear of humans, not expect a handout."