If you are in Apache County, don't ignore Nelson Reservoir. It's often ignored by anglers zooming to Luna, Big Lake and beyond, but it's a decent late-spring rainbow producer. It even has some crappie.

And of course, Big Lake is providing some of the best fishing in the state for wild-like rainbows, cuts and brookies.

Luna Lake: This 27-inch, 7.5-pound rainbow trout was recently caught. The lake has more large holdover trout. Thanks to The Friends of Luna Lake out of Alpine for helping us keep this a viable fishery.

Ashurst Lake: We just received a couple angler reports of stockers and a holdover being caught.

Nelson Reservoir: Fishing is excellent. It was stocked heavily in early and mid-June. Fish in the clearer water at the upper end.

Lower lake mary: According to our Wildlife managers, working the lake this past weekend, bait fishing was good to excellent on yellow garlic PowerBait.

Brookie And Carp Entries For Big Fish Of The Year

Congrats to Trevor Dugan, who caught this 11-pound, 7.36-pound common carp caught June 2 out of Papago Pond No. 3. (Papago Park is a Community Fishing Program pond in Phoenix.)

Billy Kinder of Big Billy Kinder Outdoors radio in the Dallas/Ft. Worth area said that the picture of Brito's 5.80-pound redear taken from Lake Havasu was just shared on the station's Facebook page.

"Everybody went nuts over it," Kinder said. 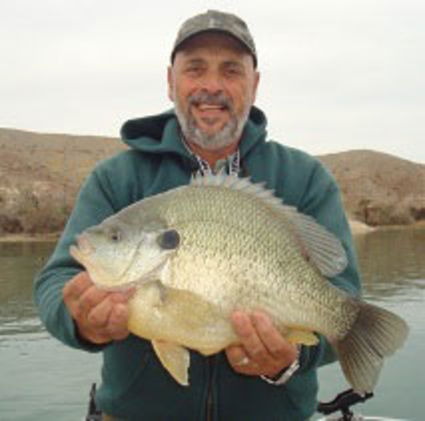 Kinder said he plans on interviewing Brito about his catch and, of course, visiting Lake Havasu to nab a tasty redear slab of his own. Redear at Havasu are in full spawn. Anglers are catching many 3-4 pounders in deeper water (25 feet) but higher numbers of the sunfish are in shallower water.

Need a license? Purchase a license that is not only valid for 365 days but also helps conserve wildlife.