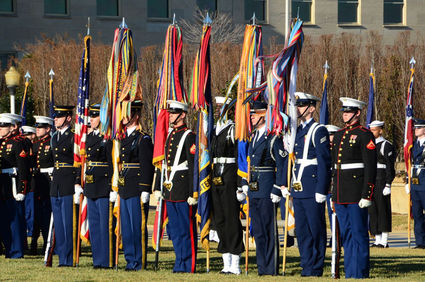 COMBINED COLOR -- The Joint Service Color Guard performs at a welcoming ceremony for Afghan President Hamid Karzai at the Pentagon, Jan. 10, 2014. The combined unit, which performs routinely for national and international leaders, includes three Army soldiers, two Marines and one service member each from the Air Force, Navy and Coast Guard.

Twice a month, Coast Guard All Hands [features] "From the Homefront," a column for Coast Guard spouses by Coast Guard spouse shelley Kimball. Shelley has been married to Capt. Joe Kimball, commanding officer of Air Station Miami, for nearly 13 years and currently serves as chapter director for Blue Star Families in Miami, Fla.

I spend a lot of time explaining Coast Guard life to other people - not just here, but everywhere: to my neighbors, at the gym, at the grocery store, at kids' birthday parties.

I know I am not alone. Every Coastie I know has a set list of responses for the questions we get. We love that people want to understand us. So, ... I crowd-sourced the question and asked people to tell me what they wish people knew about Coast Guard life. I sent out a survey over social media, and asked everyone to weigh in to come up with the following top-10 list.

The confusion may arise because the Coast Guard is housed under the Department of Homeland Security, but it is still one of the armed forces. I can't agree more with the participant who said, "That the Coast Guard is part of the military, facing the same issues as other services. I have met many people who think Coast Guard members work one weekend a month and are sometimes called up during emergencies. I wish they knew that we are active duty every day, with families who face long deployments, frequent moves, dangerous situations, and other struggles."

2. The Coast Guard does more than search and rescue. Yes, we are incredibly proud of the 20, 510 search and rescue missions in 2012, and the 3, 800 lives saved. But we also want everyone to recognize the thousands and thousands of maritime inspections and boardings Coasties conducted to keep our waters safe.

And, add to that the drug interdictions - more than 166,000 pounds of cocaine were removed in 2012. Just recently the Coast Guard in Miami seized what may be an historic amount of cocaine - $37 million worth.

3. We do so much with so few. There are about 43,000 active duty members in the Coast Guard. One participant said, "The USCG is a very selective branch and just because we're small doesn't mean we aren't powerful!" And that's true.

Go back to those boarding and drug interdiction figures and remember that the Coast Guard has only about 8,500 more people than the New York City Police Department.

4. Coasties are on duty every single day. The Coast Guard is active duty, not a reserve unit. (We do have separate reserve and auxiliary units.) I often tell people that when your family would batten down the hatches in the face of an emergency, that is when our Coast Guard members are heading to work. The Coast Guard is on duty 24/7, and it has been since 1790.

Members of the U.S. Coast Guard Patrol Forces Southwest Asia deploy for a year at a time to the Middle East. In wartime, the Coast Guard can also be called to augment the Navy. Stateside, Coasties deploy every day in their duties - there are cutters out for months at a time.

6. We PCS, and no, we can't always pick where we go. We do get wish lists and dream sheets, but that doesn't mean we always get our top choices, just like every other military service branch. We generally move every two to four years.

8. We rely on, and we appreciate community programs that support the Coast Guard. So, because of #7, the programs that include the Coast Guard are really important to us. Our bases are also smaller, and therefore we don't necessarily have commissaries and exchanges as do other services. As one participant said, "For communities to have programs in place for military members and their dependents, it's really needed and appreciated."

9. We are not all on the coast - some of us are inland. For example, the Eighth Coast Guard District runs from the ports of New Orleans and Houston north through 26 states in the heartland. This district protects 10,300 miles of inland waterways.

10. We take great pride in Coast Guard service. We are a close-knit military service, and we are proud of the sacrifices our families make to help keep the Coast Guard strong.

I love how one Coastie summed it up: "That most of us are just normal people who are just happy being married to our Coastie. Even if it isn't always the most glamorous or accommodating lifestyle, when the day ends, we just want to be home with our spouse and our families."

And another, who said, "I wish people knew how often we move, how little control we have over transfers, how often they are at sea, how isolated we can be from military-support services, and how service impacts our children. Also, how proud we are and the great work done by Coasties."

The more people learn about us, the more they will embrace and understand us.

The views expressed herein are those of the author and are not to be construed as official or reflecting the views of the Commandant or of the U.S. Coast Guard.

Editor's Note: This article is reprinted with permission - and with our gratitude - from "The Official Blog for the Coast Guard Workforce"