A Coast Guard Explosive Detection K9 retired after six years of service, in a retirement ceremony held at the Maritime Safety and Security Team in Galveston, Texas.

Chief Bert, a Coast Guard military working dog retired after six years of service. The German Shepard has been employed as an Explosive Detection Dog during his time in service. His handler, Petty Officer 1st Class Chandler Nuttal has been partnered with Bert for the duration of the K9's career. 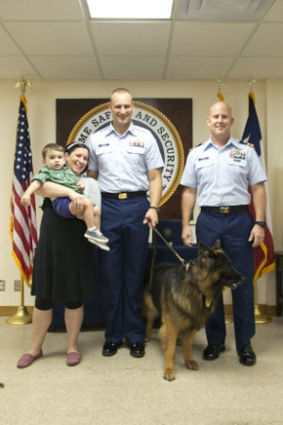 Bert was also hand-selected to participate in the Coast Guard's inaugural deployment of K9 Explosive Detection Team assets along the international U.S./Mexico border. During this deployment he completed 50 shore-based patrol hours, assisted in the execution of 40 recreational boat boardings and conducted 50 Explosive Detection vessel sweeps.

"For nearly the past half decade, Bert and Nuttal have distinguished themselves to be an inseparable working and personal cohesive unit," said Lt. Cmdr. Steve Morris, the commanding officer of MSST Galveston.

"The dedication and loyalty both Bert and Nuttal display for each other are evident in their interaction throughout the greater Houston area. Both of their efforts directly enhanced the safety and security of major seaports and airports in the Southeast Texas region and across the globe."

Upon Bert's retirement, he was adopted by Chandler and his wife.