A new National Park Service (NPS) report shows that over 4.7 million visitors to Grand Canyon National Park in 2014 spent $509 million in communities near the park. That spending supported 7,846 jobs in the local area and had a cumulative benefit to the local economy of $711 million.

"Grand Canyon welcomes visitors from across the country and around the world," said Superintendent Dave Uberuaga. "We are delighted to share the story of this place and the experiences it provides. We also feature the park as a way to introduce our visitors to this part of the country and all that it offers.

National park tourism is a significant driver in the national economy, returning $10 for every $1 invested in the National Park Service, and it's a big factor in our local economy as well. We appreciate the partnership and support of our neighbors and are glad to be able to give back by helping to sustain local communities." 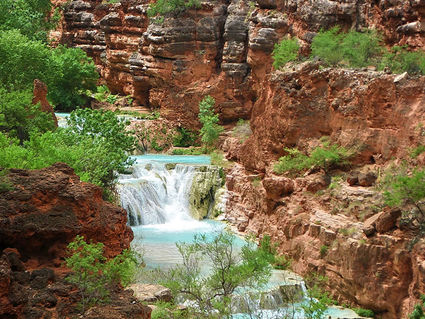 A COOL IDEA – For the summer months, trails that lead to beauty such as the Grand Canyon's Upper Beaver Falls offer respite from summer temperatures and are not far away from the Valley of the Sun.

This spending supported 277,000 jobs nationally; 235,600 of those jobs are found in these gateway communities. The cumulative benefit to the U.S. economy was $29.7 billion.

The report includes information for visitor spending at individual parks and by state.

To learn more about national parks in Arizona and how the National Park Service works with Arizona communities to help preserve local history, conserve the environment, and provide outdoor recreation, go to http://www.nps.gov/Arizona.