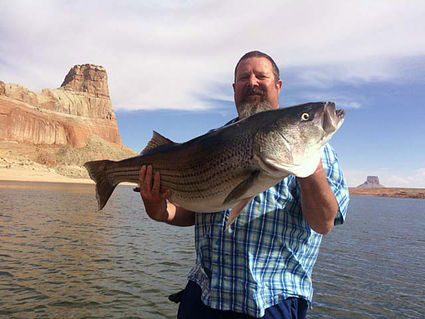 Steve Roberts from Clear Lake, Iowa, had a great first trip to Lake

Powell. He did his homework by reading all the fish reports on Wayneswords.com two weeks before his arrival. When he finally arrived, he couldn't wait to get out on the lake. He launched at Wahweap and headed through the Castle Rock Cut to Warm Creek and started fishing

for Bass. There were a few Bass that cooperated but it was challenging fishing due to the cold front that had just passed by.

Roberts then headed to the back of the Warm Creek with his fishing buddy, Dan Zanfes, from Show Low, Ariz. Near the end of the bay on the east side, the anglers cast plastic jigs to rocky rubble in 8 feet of water. Roberts chose a shad-colored Zoom Fluke on a 3/8th ounce head.

The first fish he caught was a healthy smallmouth Bass that weighed about 2 pounds. That got the adrenaline flowing so he cast out to the same shallow spot again and got another bite.

This time, the fish munching on the fluke was a bit larger and headed for deep water. Roberts had on 8-pound test line so he hung on while the fish took line. For the next 30 minutes, they went back and forth but patient Roberts finally prevailed and coaxed the fish close enough to the boat for Zanfes to net the monster.

Robert's first Lake Powell striper weighed in at 30.9 pounds with a girth of 24 inches. He brought the fish back to Wahweap where it was weighed on certified scales by Wayne Gustaveson. This is the largest fish to be landed at Lake Powell in 2015.

The Lake record striper is 48 pounds, 11 ounces but that was caught in 1991. Since then, the trophy Stripers caught have all weighed between 31 and 36 pounds.

Congratulations to Steve Roberts on his great catch. All fish are big and healthy this year. My guess is that another lake record will be caught in 2015. The easiest record to beat is smallmouth Bass at 5 pounds, 6 ounces. I would not be surprised to see that record fall in 2015.

If you catch a big fish, it can be weighed on certified scales at Wahweap of Bullfrog. Call Wayne Gustaveson at (928) 645-2392 to start the weigh-in process.