This Makes A Great Day Trip From Phoenix 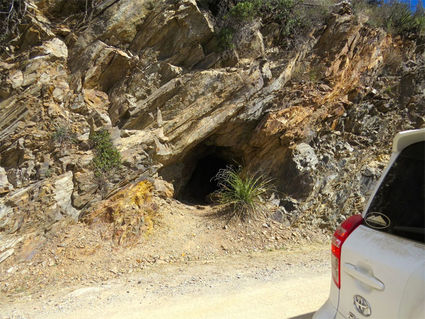 Cave On Side Of Road

If you're looking for a great day trip from Phoenix, I've got a great idea for you - the Pinal Mountain Recreation Area. We have driven past the little brown sign for it in Globe dozens of times, and we finally decided to go check it out. I'm really glad we did, because it's a beautiful place. There are campgrounds and plenty to see up there, and the Forest Service site says the campgrounds are good for trailers up to 20 feet.

We actually had a bit of a time finding it, even though we took the turn at the sign. We wound up at a dead end and had to backtrack, and asked a resident which way to go, but he had no idea.

It turns out that Russell Road turns into FR 55, and that's the way you need to go. There are a couple of other roads that head into the mountains, and, in fact, we came out on one that took us right by the Besh-Ba-Gowah Archaeological Park.

Soon after becoming FR55, the road is gravel. It's a twisty road that winds up the mountains and there are some gorgeous views. At one point there is a cave, probably an old mine, right next to the road. I hopped out to look at it, but I decided not to go in. Caves aren't my thing!

One of the cool things about mountain roads is watching the scenery change around you. We went from desert to forest in about an hour. We crossed a little stream that was running and we even saw some leftover snow on the road. This was mid-February, so it was still very chilly at the top.

There are a lot of trails and there is even a map you can print out online. We didn't hike any of them, but we will be back. This was strictly a reconnaissance trip. From what I could see on the map, the trails all seem to be out and back trails, and all of them look to have a lot of elevation change. It is a mountain, after all.

The first campground we came to was the one we ended up liking the best. It was called Sulfide Del Ray site and the woods were gorgeous. There are picnic tables, fire pit grills, and a vault toilet, but no drinking water.

This was the site of an old community where the miners lived to get away from the heat of the desert where they worked in the day time. There are ten sites here and no fees. Just pack out your own trash. There is a 14-day stay limit.

Further up the road there are two more campgrounds - Pinal and Upper Pinal. Pinal has 13 units and Upper Pinal has only three, but both campgrounds have toilets, tables, and grills. Again, there is a 14-day stay limit and no drinking water, but also no fees. Pack your trash out. The Forest Service lists the elevation of these campgrounds as 7,500 feet, so dress accordingly.

The forest around the campgrounds is ponderosa pines and white fir, and hiking trails take off all over the place. According to the map, there are at least eight trails within a mile of the Pinal and Upper Pinal. These campgrounds are on sites that were once used by the U. S. Army for heliograph signaling in the late 1800s.

We have found many such sites on our rambles - near the Chiricahuas, in the Pinalenos, and now here again in the Pinals. The army used mirrors to reflect sunlight and send messages to widely separated outposts. Pretty cool!

A Place For Solitude

We stopped to stretch our legs and have a little picnic at the Upper Pinal site and there was absolutely no one there. In fact, the only other people we saw the whole time were quad riders and one little family roasting hot dogs over a fire in one of the campgrounds. If you're after solitude, this place is hard to beat, at least in February.

There are a couple of dozen homes on the mountain, and there are a lot of radio towers on several different peaks, so the road is very well maintained. You don't need a 4WD in dry conditions.

You can't really get lost up there, either. Although there are several little side roads to investigate, none is long and you always end up back on the main road, which makes a loop at the top.

You end up coming back down the same way you went up, except that you can take a right at one point when you're almost back to Globe and take FR112 the rest of the way. This is the way that takes you past the Archaeological Park.

It wasn't very late in the day when we left the Pinal Recreation Site, so we decide to take a long loop back to Phoenix and we headed south on Highway 77 toward Winkelman. At milepost 141.4, north of Winkelman, we saw a sign that said "The Shores."

It's a recreation site on the Gila River where you can camp, picnic, bird watch, and even hop in the river if you want to. It's a popular tubing site, but when we were there we were the only humans. There are no fees here, either.

A bit farther south, about half a mile past milepost 144, is the Christmas Recreation Site. There is primitive camping at both sites, with fire pits and vault toilets.

We continued on past Winkelman, but you could get on 177 here and head back to Highway 60 and Superior. We opted to see Mammoth and Oracle, so we continued south.

The town of Mammoth was named after the Mammoth Mine, so named because they believed the gold ore deposits were mammoth. It's a small, pretty town of about 1,500 people.

Oracle is just down the road, and we plan to come back on a weekend so that we can check out the Oracle State Park. It isn't open on weekdays. At Oracle Junction we took Highway 79 (Pinal Pioneer Parkway) back to town, with one last stop - the Tom Mix Memorial.

We arrived there just at sunset, signed the book, and headed home. All in all, a wonderful day - where else but Arizona can you be in the desert, the forest, snow, and the beach all within hours on the very same day? 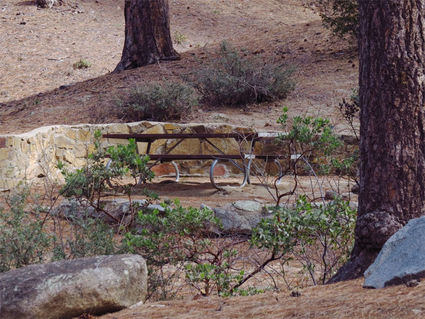 Here is how the Forest Service says to get to Pinal Mountain Recreation Area. We simply drove to Globe and turned at the sign, but we got a bit twisted around at first. Maybe this way will work better for you:

"This site is 14.5 miles southwest of Globe. From Globe, follow paved Jess Hayes Road southeast of Globe to the junction of Icehouse Canyon Road/Forest Road (FR) 112 and Sixshooter Canyon Road/Forest Road (FR) 222. Continue on paved FR 112 for 2½ miles, to the junction of FR 55 and FR 112. Take the right fork and continue on the partially paved FR 55 for 2½ miles. At the junction of FR 55 and FR 651, turn left. Proceed 10 miles on unpaved FR 651 to the site." These are the FS directions to the campgrounds.