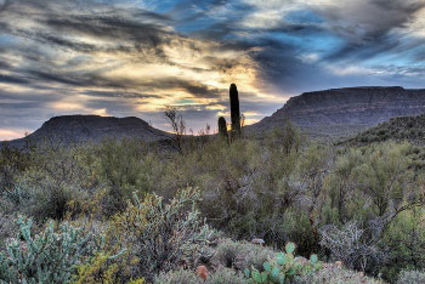 A growing number of outdoor recreationists are getting involved in an effort to ensure continued access to public lands in Arizona by promoting outdoor ethics.

The Respected Access is Open Access in Arizona initiative is being supported by a coalition of partners including the Arizona Game and Fish Department, Bureau of Land Management, the U.S. Forest Service, and Tread Lightly!, a national non-profit organization that promotes responsible outdoor recreation through education and stewardship programs.

Outdoor billboards, public-service announcements, and outreach and education efforts are spreading the important message that Respected Access is Open Access in Arizona. Volunteer cleanups over the last few months at several public lands locations around Phoenix have drawn hundreds of volunteers.

For example, more than 400 people showed up at a January event at the Hewitt Station area of the Tonto National Forest. They cleaned up more than 40 tons of trash at 10 different locations.

"The momentum is building and we're thrilled at the involvement of so many responsible outdoor recreationists," said Lori McCullough, executive director of Tread Lightly! "Engaging the recreational shooting community in addressing these issues is the proactive solution to these problems and we hope all recreational shooters will become ambassadors for this effort."

The campaign took shape because of ongoing problems with irresponsible behavior on public lands. Trigger trash, illegal dumping and vandalism such as shooting up saguaro cactus have led to the closure of some public lands locations around Phoenix to recreational shooting.

While these unacceptable activities are perpetrated by a small portion of irresponsible shooters, they have a big impact on all recreational shooters.

"We are pleased to be a partner in this effort to promote responsible shooting practices on public land," said Mary D'Aversa, manager of the Phoenix District Office Bureau of Land Management. "We are responsible for 2.4 million surface acres in Arizona and we recognize how citizens value access for the recreational activities they enjoy. We encourage all recreational shooters to get involved in the "Respected Access Is Open Access in Arizona" effort by taking part in upcoming events and helping to spread the word about appropriate recreational shooting habits to shooting friends and partners."

Take the pledge to ACT responsibly. Go online to http://www.openaccessarizona.org and pledge to be a responsible shooter and sign up for a chance of winning a prize. The pledge asks people to be accountable for their shooting behaviors, to clean up after themselves and Tread Lightly on public lands. Those who pledge will have a chance to win a $100 gift card from a sporting goods store. One winner per month will be drawn.

"The Arizona Game and Fish Department is a strong supporter of this campaign," said Game and Fish Director Larry Voyles. "Arizona is fortunate to have many millions of acres of public land open to multiple use. By engaging a broad community of stakeholders to promote good stewardship practices and participate in clean-up efforts, we are assisting in the maintenance of these areas and protecting future access to them."