It's A Special Year Ahead: Don't Miss Out On The Action 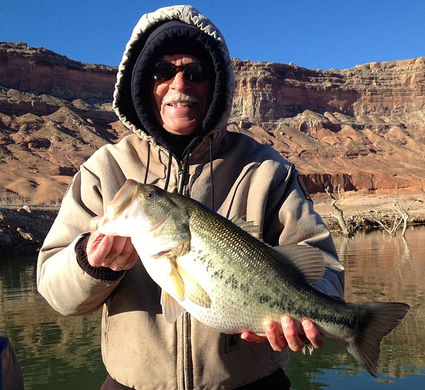 THIS IS THE YEAR! -- Wayne Gustaveson stopped shivering long enough in February to toss a shad-shaped worm into shallow water on a drop shot rig and come up with a really nice 5.5-pound largemouth bass. This will be the year to catch really hefty large fish in a wide variety of species in Lake Powell.

The striper hot spot this week at Lake Powell is Good Hope Bay. This will be a recurring theme in 2015. Striper numbers and shad forage are higher in the northern lake. Reports from Good Hope this week indicate it is possible to catch 100 stripers per day while graphing and spooning.

Begin the search in Good Hope Bay near Red Canyon. You may have to go as far as The Horn to find a school. Graph the 25-45 foot contour looking for big striper schools. These schools are large and easy to detect. Stop the boat directly over the school and immediately drop spoons to the bottom.

Fish in an active school will hit the spoon as it comes down. Inactive fish have to be coaxed so jig the spoon off the bottom perhaps three to four times. Then retrieve the spoon as quickly as possible for 15 20 feet, before stopping and jigging at mid depth. This gives any trailing fish an excuse to grab the suspended spoon.

If there were no followers, rest assured the fish in the resting school are "looking up," just waiting for the bait to come back down. Give them what they want by dropping the spoon back to the bottom. If the spoon lands within the school again, they won't disappoint.

There will soon be a fish holding on to the spoon with others following, trying to get a good look at what the first fish ate. Then its game on! The whole school goes into feeding mode. Work quickly to hook, land fish, unhook, and return the spoon to the water as quickly as possible. Admire the fish after the school moves on. Just concentrate on catching fish while the school is in range.

In the southern lake it is not quite that easy. Shad numbers are less and stripers seem to be separated from shad. Try trolling while graphing. Lately we have been seeing small groups of 10 stripers or less on the graph instead of the huge schools found in the north.

These randomly scattered fish are better targets for trolled lures than a precise spoon drop. Troll in the backs of most canyons where water color is slightly stained and water depth is the same 25-45 feet.

When a striper hits the trolled lure, be ready to toss a spoon or a crankbait to any following fish. There will be occasions when a small bunch of stripers follow the hooked fish and an extra two to three fish can be caught at each stop.

If Bass Are The Target

If bass are the target, some rally fat large and smallmouth are being caught near brush. That sounds simple but requires some explanation. Submerged shoreline vegetation is scarce and the lake level continues to fall.

"Brush" is defined as tumbleweed piles, cattail clumps washed into the lake from flash floods last fall, or any other unusual structure that a largemouth bass could call home. Sometimes it is a rock, ledge, or a change in water color.

Finding bass-holding habitat is challenging but may be the key to catching the huge bass that are available right now.

When a good spot is found, it can be fished more than once. If bass are caught in a likely spot, let it rest and return two hours later to find more bass.

Bass fishing in the southern lake seems to be almost as good as in the north. The general rule this year is that bass are bigger, fatter and more satisfying than in any recent year. There have been some really big bass landed already and many more are expected as the water warms.

Walleye are spawning now so they are challenging to catch. Fishing will be better in mid-April after spawning is over. But, females that are not actively spawning can still be enticed by night crawlers towed behind a spinner rig on a bottom bouncer or a trolled crankbait ticking bottom at 12 feet in murky water.

A Banner Year Ahead

Expect to interact with some quality fish this year no matter which species is pursued. Don't miss out on the action. This year is going to be very special.