On the 40th anniversary of the enactment of the Grand Canyon Enlargement Act, four outdoor recreation and conservation groups presented 78-year-old Jeff Ingram of Tucson, Ariz., with a lifetime achievement award.

The award, with a cash value of $4,000, was presented to Ingram by the Coalition of American Canyoneers, Living Rivers, Grand Canyon Hikers and Backpackers Association, and River Runners for Wilderness, in recognition of his efforts to preserve one of America's natural wonders.

First View Of The Canyon

Ingram grew up in Hamilton, N.Y., and studied mathematics and political science at Massachusetts Institute of Technology. After graduating from MIT, he received a fellowship from Columbia University.

In 1962, Ingram, his wife and first daughter headed west and stopped at the Grand Canyon. That first visit to Mather Point with his one-year-old daughter in his arms set the course for his life. Of that first view, Ingram noted in a recent interview that "it was inexpressible beyond words. The intensity of that vision is one of the things that defines the Grand Canyon as the iconic place it is."

In 1964, Ingram met David Brower, then executive director of the Sierra Club, and two years later made his first river trip through the Grand Canyon with Brower, Martin Litton, and others.

Following this trip Brower hired Ingram as the Sierra Club's Southwest Representative to lead efforts to oppose construction of two massive dams on the Colorado River within Grand Canyon. Increased awareness of the plans galvanized public opposition, ultimately leading the Bureau of Reclamation to abandon the projects.

In order to cement enduring protection for areas threatened by the dams, Ingram and others championed efforts to expand the boundary of Grand Canyon National Park. Not long after being evacuated from the bottom of the Grand Canyon following a rattlesnake bite, Ingram was in Washington, D.C. for Congressional testimony on enlargement legislation.

In 1998, Ingram wrote Hijacking A River: The Political History of the Colorado River in the Grand Canyon. In 2009, Ingram started a blog at http://gcfutures.blogspot.com/ Ingram states his blog entries are aimed at bringing more light to the dark corners of Grand Canyon management, celebrating the entire Grand Canyon and its place as an icon of our environmental consciousness into the future. 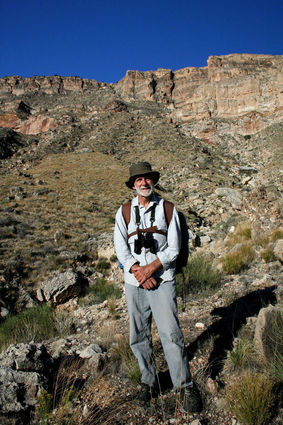 ADVOCATE HONORED -- Jeff Ingram is pictured in The Grand Canyon.