This Year, Fish In The Canyons

Sport fishing at Lake Powell enjoyed a great year in 2014. Threadfin Shad came back in record numbers, allowing all fish species a seat at the banquet table. Fish responded by growing rapidly in the warm water during fall 2014. Now, over winter, feeding continues for striped Bass.

Fish health and condition is remarkable. Striped Bass have not been this healthy since the backs of the canyons where Shad spend the winter.

It looks as if 2015 will be a year to fish the backs of the canyons instead of the main channel.

Ray Young, Page, Ariz., confirmed that recently by catching 1993. When Shad are at a low point in the spring, Stripers typically head to the main channel by the dam in the southern lake or Moki wall near Bullfrog. When Shad are thick, Stripers stay in a 12.1-pound, 32-inch striped Bass trolling near Lone Rock in Wahweap Bay. Fishing was not fast but five smaller Stripers were caught along with the big one. The other angler in the big-fish picture is holding the fish: Dana Andrus, also from Page. (Young is wearing a neck brace so he needed help to handle the big striper.) 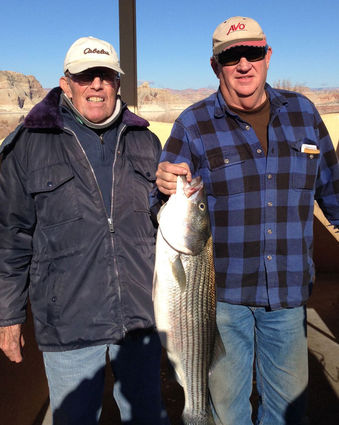 The fishing pattern was very similar to successful techniques that produced well in November and December. The big fish was caught on a Lucky Craft XD100 Pointer trolled behind a one-ounce weight to gain more depth. Bottom depth at the capture site was 30 feet. The 30-45 foot strata has been the prime holding depth for striper schools and that did not change in the dead of winter.

If fishing for Stripers during the next two months, head to the back of any canyon and troll while graphing, looking for striper schools. Target the area where bottom depth is 30-45 feet.

If only single fish are seen, troll over them hoping to catch a Bass, walleye or striper. If a fish school is seen, stop the boat and jig with spoons or marabou jigs to catch Stripers.

Fish quality at Lake Powell will be superb in 2015. Fewer fish will be caught because there is much more food than normal. However, the end result will be higher satisfaction with each fish caught because of the size and quality of the catch.