PHOENIX – The Arizona Game and Fish Department, Berger Bullets and Nightforce Optics invite the public to attend a presentation to the state of Arizona of a newly constructed building and parking lot at the Ben Avery Shooting Facility, located off W. Carefree Hwy., one mile west of I-17 (just west of mile marker 30).

The presentation will be held Saturday, Feb. 14 at 8:15 a.m. during the SW Nationals long-range shooting competition that hosts 350 shooters worldwide.

"The Ben Avery Shooting Facility is recognized as one of the nation's top venues for recreational shooting," said AZGFD Director Larry Voyles. "With the donation by Berger Bullets of a new multipurpose building at the 1,000-yard rifle range, and expansion of the parking area paid for by Nightforce, our long range recreational shooters will enjoy the addition of much needed facilities and a better shooting experience at a world class facility." 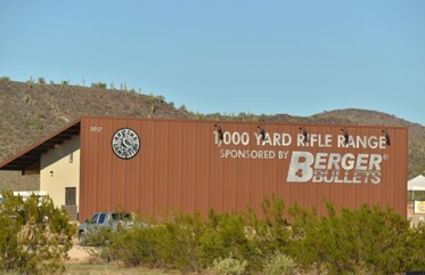 Highlighting the dedication ceremony will be a forward by AZGFD Commission Chairman Robert Mansell, and the National Anthem played by Dr. Jesse McGuire. Dr. McGuire will be supported by the Color Guard from Carl Hayden High School, a fireworks display, and an aerial presentation by vintage World War II planes. Also during this event, the 1,000-yard shooting range will be dedicated to U.S. Air Force Veteran and World Champion rifle shooter Middleton "Mid" Tompkins.

Tompkins has dedicated his life to shooting sports. His success as a shooter is matched only by his contribution to the shooting sports in his role as a member of the NRA Board of Directors and director of the matches held at the 1,000-yard rifle range since Ben Avery opened in 1957.

"We're proud to partner with Arizona Game and Fish Department to improve recreational shooting facilities in Arizona," said Eric Stecker, President of California-based Berger Bullets. "Arizonans should be proud that their state is actively working to benefit the law-abiding shooting sports enthusiasts."