Watch The Wild West Come To Life At Winter Range

The largest Western-style encampment in the world will return to the Ben Avery Shooting Facility in Phoenix, Feb. 23 - 28.

In addition, this year the Cowboy Mounted Shooting Association and the SASS Mounted Shooters have combined to create an incredibly exciting three-day mounted shooting event. The event is expected to draw more than 100 competitors mounted on horses participating in their own arena Feb. 27 - March 1.

Cowboy Action Shooting™, the fastest-growing shooting sport in America, requires that contestants compete with firearms typical of those used in the taming of the Old West: single-action revolvers, lever-action rifles, and period shotguns.

Participants must also adopt a shooting alias appropriate to either a character or profession of the late 19th century, a Hollywood western star, or an appropriate character from fiction, and then they costume themselves accordingly. This is a shooting sport that is safe, fun and family friendly, annually drawing multiple generations of the same family to compete in their respective categories.

In addition to the competitive events, Winter Range 2015 will feature displays of period militaria, exhibitions of western skills and crafts, a fast-draw competition, and nearly 100 vendors purveying everything from period clothing, hats and wigs to antiques and reproductions. Entertainment will be readily available in the form of a number of singers, cowboy bands, trick roping, trick horses, and various other forms of cowboy entertainment.

The Earps Will Be There

Also this year, Wyatt Earp, the great grand-nephew of his namesake, will be giving a special stage presentation with his wife as "Mr. and Mrs. Wyatt Earp," reminiscing about their amazing lives and times at 2 p.m. on Saturday, Feb. 28. 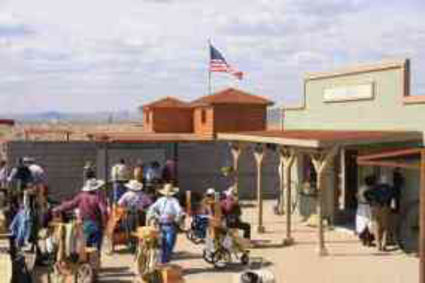 A variety of food services are also available, ranging from authentic chuck wagon cooking to hot dogs and ice cream.

The Ben Avery Shooting Facility is a five-star rated shooting facility and Phoenix Point of Pride operated by the Arizona Game and Fish Department. It is located on Carefree Highway in Phoenix, just west of I-17.

Winter Range is truly an exciting and educational event for the entire family. Admission is free with a small charge for parking that is donated to charity.