The Arizona Game and Fish Commission voted to give the director of the Arizona Game and Fish Department authority to finalize a cost-sharing agreement with the U.S. Fish and Wildlife Service (Service) to repair the Willow Beach National Fish Hatchery. In a 5-0 vote, the commission agreed to pay up to $389,000 to fix a broken pipeline for the hatchery. The contribution amounts to 50 percent of the cost of the project.

"This is a great pre-New Year's present for the people of Mohave County and anglers across the state," said Commission Vice-Chair kurt davis of Phoenix. "Sportfishing recreation contributes $1.47 billion to Arizona's economy annually, with much of that money going to rural communities, and Game And Fish is proud to be part of the solution keeping Willow Beach in business."

Thank You To McCain, Gosar

The vote by the Commission to cost share the willow beach hatchery repairs comes after much work by Arizona's congressional delegation, particularly Senator John McCain and Congressman Paul Gosar, who championed a repair to the hatchery. Mohave County officials, including County Board of Supervisors Chair Hildy Angius, also worked diligently to ensure trout production wasn't lost at Willow Beach. Senator McCain said he is proud that the commission has worked with other Arizona and federal agencies to keep the hatchery online.

"I am very pleased that an agreement between the Arizona Game and Fish Commission and the U.S. Fish and Wildlife Service to restore trout stocking at willow beach hatchery in Mohave County is a big step closer today," said Senator McCain.

"This will be an important development for this stretch of the Lower Colorado River, where trout fishing supports some 1,700 jobs and generates $75 million in economic activity. The endless opportunities for outdoor recreation are among the most unique aspects of life in Arizona."

Infrastructure problems at the hatchery began nearly five years ago, when broken pipelines and low water levels threatened trout production at the facility. The loss of the trout stocking would continue to have a devastating economic effect on the communities in Mohave County, Arizona. The state's sport fishing industry relies on the national hatchery system for more than 97 percent of sport fish stocked in Arizona.

"Without the Commission stepping up to provide the funding for the repair, it is unknown when the trout stocking mitigation program along the lower Colorado River would have resumed," said Game And Fish's Chief of Fisheries chris cantrell.

Partnership Into Next Decade

The agreement approved by the Commission will, if executed, commit the Department to share the costs of repairs, and institutionalize a recreational fishing partnership with the U.S. Fish and Wildlife Service into the next decade. 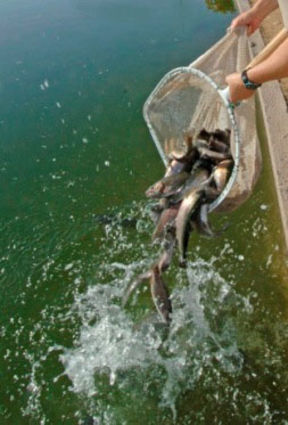 "We are proud to approve the motion for our director to finalize a cooperative agreement providing vital assistance to an important industry in Arizona, and grateful to Senator McCain for his staunch support of returning trout propagation to Willow Beach," said Commission Chairman Robert Mansell. "With the execution of this agreement, Arizona will retain its reputation as one of the finest sport fishing destinations in North America."