Prestigious award is given annually to one outstanding industry leader.

"The Boating Ontario Board of Directors have unanimously voted to present Sara with this year's Boating Ontario President's Award," said Carroll. "This award is presented each year to one person from the industry [who] has made a significant contribution to the Ontario Boating industry."

"With Sara's leadership, NMMA Canada has made the Canadian recreational Boating industry stronger and more unified in our advocacy efforts and beyond," said Donald Dubois, chairman of NMMA Canada.

"In addition to providing Canadian marine companies with valuable resources to grow their business, Sara's government relations expertise has made NMMA the leading authority with government officials for recreational Boating in Canada."

"This is recognition of the hard work Sara is doing for the Canadian Boating industry and the outstanding job she has done building a strong relationship with Boating Ontario and Marine Trade Associations (MTAs) in Canada," said Thom Dammrich, president of NMMA. "Sara has successfully created a unified voice for the Canadian recreational Boating industry and created a stronger North American presence."

In 2014, under Anghel's leadership, NMMA Canada actively engaged with the government to ensure water access for two of Canada's historic canals located in Ontario. The reinstatement of the hours of operation on the Trent-Severn Waterway and Rideau Canal were a direct result of the industry's unified advocacy efforts. Working closely with MTAs and the Office of the Minister of the Environment, together they were able to reinstate the hours of service. 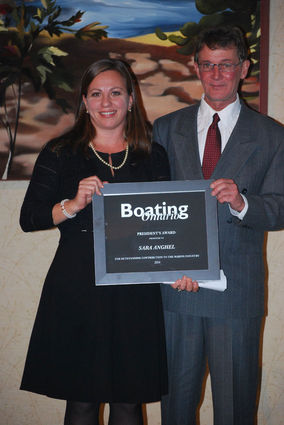 Notable accomplishments from her tenure at NMMA include the first-ever annual Canadian Recreational Boating Statistical Abstract, securing more than $200,000 in government funding to support the industry, and establishment of NMMA Canada's first Recreational Boating Day on the Hill in Ottawa, an annual event where industry leaders meet with government officials to address key issues impacting the Boating industry.