Hall of Flame Museum Of Firefighting

Here Is A Treasure Of History And Honoring 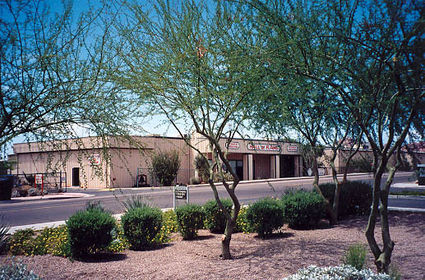 The Hall of Flame in Scottsdale/Phoenix, Ariz., has almost an acre of fire-history exhibits with over 90 fully restored pieces of fire apparatus from around the world on display.

Also here is the National Firefighting Hall of Heroes, which honors firefighters who have died in the line of duty or who have been decorated for heroism, and a memorial to the firefighters and other rescue workers lost on 9/11.

In addition, there is a large fire-safety exhibit, which includes a two-room safety house and many hands-on exhibits for children, among them an American LaFrance fire truck to climb aboard and play on.

History Of The HOF

Mr. Getz died in 1992. His grandson, George F. Getz, was elected to the presidency of the Foundation. Mr. Getz' son Bert, his grandson Bert, and his granddaughter Lynn are also members of the foundation's board of trustees. The Getz family strongly supports the goals of the Foundation, which are three:

• The collection, preservation and exhibit of objects relating to the history of firefighting;

• Recognition of firefighters who have died in the line of duty or who have been recognized for acts of heroism.

The Hall Of Flame Moves To Arizona

In 1961 the collection was large enough for exhibit in a small museum in Lake Geneva, Wis., near the Getz summer home. A few years later, the Hall of Flame moved to Kenosha, Wis., where it remained until 1970. In that year, the Getz family moved to Scottsdale, Ariz., and Mr. Getz decided to move the Hall of Flame as well.

In 1974 the Hall of Flame opened its present building in Phoenix's Papago Park, adjacent to the Phoenix Zoo and Phoenix Municipal Stadium.

The Hall has grown from its original single gallery to five exhibit galleries, the National Firefighting Hall of Heroes, the museum store, a theater, a restoration shop, a collection storage building, and administrative offices.

The Hall's present size is 70,000 square feet, with 35,000 square feet of exhibit galleries. The collection has grown to over 130 wheeled pieces and thousands of smaller artifacts.

The galleries contain a wide variety of exhibits, including fire apparatus, artwork, uniforms and equipment, firemarks, alarm room equipment, and a large fire-safety exhibit, which includes a two-room safety house, a mini-theater, and many hands-on exhibits for children.

The Hall has a membership of over 400 individuals, fire departments, and companies, who receive a wide variety of benefits in exchange for their membership fees.

Now your name or that of a loved one can become a permanent part of the Hall of Flame. For the first time, we are offering the chance to purchase a personalized brick to commemorate your contribution to the world's largest museum of firefighting history.

For just $100, a brick with your name, or a message of your choosing, will be added to the floor of our reproduction 19th-Century firehouse display, located at the north end of our Hall of Heroes gallery.

Messages may be up to three lines and approximately 45 characters in length (museum staff reserves the right to determine appropriateness). Memorialize a friend or loved one, a fallen firefighter, your hometown fire department, or just your own name-you deserve it. Can't decide on a message? Buy two or three; they're tax-deductable!

Don't miss your chance to get in on this special offer! Approximately one thousand bricks are available; we will accept orders until all bricks are purchased. Installation dates of engraved bricks will vary based on purchase date.

The Hall of Flame Museum Of Firefighting is located at 6101 East Van Buren,

Phoenix. AZ 85008. Hours are Monday through Saturday from 9 to 5, and Sundays from noon to 4, every day of the year except New Year's Day, Thanksgiving Day and Christmas Day.