The endangered, native desert pupfish took another step towards recovery recently when over 300 fish were released by the Arizona Game and Fish Department into a refuge pond at Mesa Community College's Red Mountain Campus (MCC).

The fish that were released came from ponds at the Phoenix Zoo and Nina Mason Pulliam Rio Salado Audubon Center. Both partners work to help reproduce pupfish.

Another native fish, longfin dace, were mostly removed from the MCC pond prior to the release to allow pupfish to breed and establish with minimal competition. The longfin dace removed from the pond went to the Phoenix Zoo's Arthur L. and Elaine V. Johnson Foundation Conservation Center to help with management efforts of several other native species that are on the Endangered Species List and in danger of disappearing from the state's waters.

"Native fish are in big trouble in Arizona," MCC's Life Sciences Chair Andy Baldwin says. "The goal is to eventually remove the desert pupfish from the endangered species list, and MCC will pay a vital role in the process as its Life Sciences Department focuses on conservation and regrowth of these special fish."

The refuge pond, or cienega, at the Red Mountain Campus serves multiple purposes by -

• allowing the college to help public agencies in the effort to restore or conserve native fish and frogs that are important to the ecosystem,

• providing an opportunity for outreach and education with the public,

• serving as an "outdoor classroom" for some of the college's courses, and

• providing an example of how educational institutions can have environmentally-friendly campuses at a very low cost.

The desert pupfish is one of 36 species that historically inhabited Arizona's waters prior to European-American settlement. The pupfish - named so because of the aggressive behavior exhibited by the male during the mating season - is a short, stout-bodied fish that historically occupied springs, marshes, cienegas and small steams below 5,200 feet elevation.

The males turn bright colors during the mating season. A female pupfish can release up to 800 eggs during a single breeding season. The species feeds on detritus, algae, aquatic invertebrates, and crustaceans.

Despite their once broad distribution, these fish currently inhabit a fraction of their historic range due to water diversion and ground water pumping, and from non-native species outcompeting pupfish for food resources and space.

Partners In The Effort 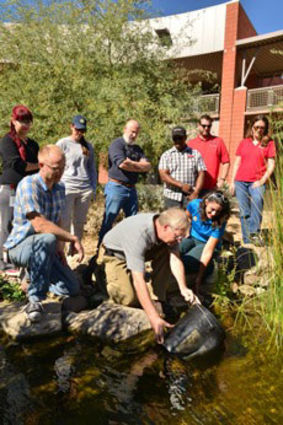 To learn more about the Mesa Community College, visit http://www.mesacc.edu/locations/red-mountain-campus.