The Southwest Sparkles Once Again 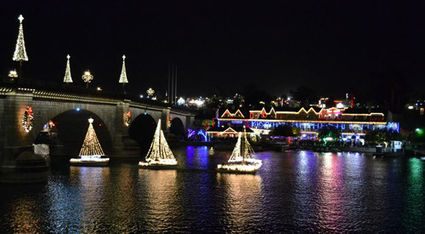 ONE OF TOP TEN - Lake Havasu City's Boat Parade of Lights has been repeatedly selected as one of the top 100 events in the U.S. by the American Bus Association.

One of the favorite traditions nationwide and beyond are the holiday boat parades; three of the most-loved in the Southwest are in Lake Havasu, Tempe, and San Diego.

For the past 32 years the Annual Boat Parade of Lights has been the must-see event of the holiday season. Many boats brightly decorated in their holiday best will delight children and adults alike. This year's theme: "Light Up the Lake!"

Watch the boats cruise through the Bridgewater Channel beginning in Thompson Bay and continuing under the London Bridge to the north end of the Channel, with a turnaround at Windsor Beach and back. Bundle up and take a stroll through the Channel - the only time you'll see the Channel packed full of boats and boaters in winter gear at night. Come cozy up with family and friends and create treasured memories of a favorite holiday tradition!

There will be great viewing at the Nautical Beachfront Resort (the starting point of the Parade of Lights),Rotary Beach, throughout the Channel on both sides between Rotary Beach and Windsor Beach, the English Village, across the London Bridge, and at any of the restaurants along the Channel. (If you do plan on watching from the Channel restaurants, early reservations are recommended.)

There is no charge to view The 32nd Annual Boat Parade. Plenty of free parking is available at the English Village and in the parking areas on the island near the Channel. Plan to get there early as traffic around the London Bridge can become congested.

More information is available at http://www.lbycboatparadeoflights.com/

The Fantasy of Lights Boat Parade is one of several annual winter holiday events hosted by the mill avenue District in downtown Tempe.

The Fantasy of Lights Boat Parade and associated activities take place on Saturday, Dec. 13, starting at 5 p.m. Santa arrives at 6 p.m. and the Boat Parade starts at 7 p.m. The Boat Parade is a rain-or-shine event.

What kind of festivities will there be at the Fantasy of Lights Boat Parade?

About 50 lighted and decorated watercraft will parade in front of the shores of Tempe Town Lake for the Fantasy of Lights Boat Parade. The METRO Light Rail LED installation on the Tempe Town Lake Bridge will provide a special display.

About one hour prior to the start of the boat parade, Santa Claus will make his appearance at Tempe Beach Park. Radio Disney presents live entertainment for families and kids. The fireworks finale will take place following the end of the boat parade. No viewing will be allowed from mill avenue bridges.

How much will it cost to get in?

Nothing! Spectators at the Tempe Holiday Boat Parade are admitted free.

Where should I park?

You'll find the most convenient parking at the following locations:

Don't want to pay for parking?

What if I have more questions? 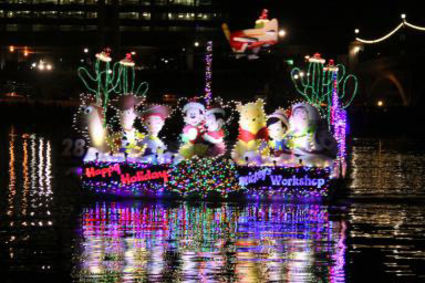 The San Diego Bay Parade of Lights is a time-honored holiday tradition brought to San Diego by the BOATING community. Join us this December for our annual Parade on San Diego Bay, with more than 80 boats lavishly decorated according to a new theme each year.

The San Diego Bay Parade of Lights is held two consecutive Sundays each year in December, this year on Sunday, Dec. 14 and Sunday, Dec. 21.

The Parade starts at 5:30 p.m. and proceeds from Shelter Island past Harbor Island, the Embarcadero, Seaport Village, and Ferry Landing in Coronado.

Whether a participant or spectator, the Parade of Lights is a festive and delightful experience for all! The theme for 2014 is "Children's Stories."