PORTSMOUTH, R.I. (Nov. 3, 2014) ─ A new scholarship fund has been established for Rhode Island's Official Sailing Education Vessel, SSV Oliver Hazard Perry, by friends and family of Virginia Wagner (Newport. R.I.). Wagner, a charter consultant for Nicholson Yachts and highly respected tall ship and yacht captain (with a 3,000 ton license and over 400,000 miles at sea), is fighting a courageous battle with mesothelioma. On Saturday October 25 she was the guest of honor at a special gathering of more than 75 people aboard the 200-foot tall ship to announce that the Captain Virginia Wagner Honorary Sail Training Scholarship Fund has been jump-started with donations already totaling over $50,000.

Captain Virginia Wagner, in whose honor a scholarship fund will be named, started out on Tall Ships, as depicted in an undated photo of her used for a donation card (credit Nonni Sansoucy).

Available for download in high resolution by clicking the photo above

"I started out as a trainee on a Tall Ship," said Wagner, explaining to the guests that the scholarship fund will be used to help at-risk youths attend the education-at-sea programs offered by the non-profit organization Oliver Hazard Perry Rhode Island (OHPRI), "and through a series of circumstances, I became a captain of the Tall Ships Galaxy and Ocean Star and then eventually a captain of yachts. As a young adult trying to find my path through life, sailing on a tall ship gave me purpose and made me into who I am today. If we can help even one young person who was like me and could otherwise be 'lost,' it's worth it."

Available to download in high resolution by clicking the photo above

The idea for the scholarship fund was first presented to OHPRI by Wagner's dearest friend Karen Kelly Shea of Nicholson Yachts, whose son Emmet had raved about his experience this past summer as an OHPRI trainee aboard the schooner Mystic. Jim Van Winkle (Austin, Texas), a charter yacht owner (True North, Matau) for whom Captain Wagner has worked over the past 10 years to "bring amazing experiences to an extraordinary number of people" launched the fund with a gracious donation, and the fund has rapidly grown as the word has spread.

Van Winkle explained that Wagner is family to him, and while Van Winkle's wife, daughter and in-laws made the trip to Newport to celebrate the announcement, so too had a charter client from Denver, Heather Haibt, who said she had been touched by Wagner's life and decided she could help make the occasion "joyful" by underwriting the music, catering, wine and champagne.

"That's just who Virginia is; everybody loves her," said Van Winkle about the team effort. She is battling the disease with the support of her long-time partner Jamie and her family and friends, and she has pursued every possible treatment and continues her fight as we speak. Many of Virginia's friends and family have already donated to this worthy cause, and we hope that the benefits of these programs will attract ongoing support for years to come."

In late September, the three masts of the 200-foot SSV Oliver Hazard Perry were stepped and coins placed at their bases in a special dockside ceremony (video at http://bit.ly/1BbHJiX). At the onboard reception for the announcement of the Captain Virginia Wagner Honorary Sail Training Scholarship Fund, guests enjoyed cocktails, hors d'oeuvres and live music (left and top right credit Nonni Sansoucy; bottom right credit OHPRI). Available to download in high resolution by clicking the photo above

The SSV Oliver Hazard Perry is currently in the final stages of construction at The Hinckley Company in Portsmouth, R.I., and when complete she will be the largest civilian sailing school vessel in the U.S. 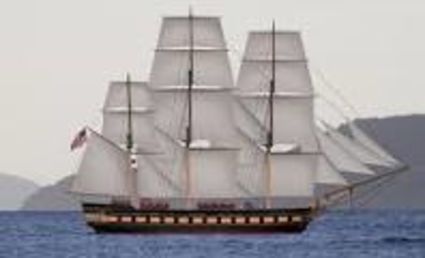 To make a contribution, go to https://ohpri.worldsecuresystems.com/scholarship. Please select to direct your donation to the Captain Wagner Scholarship Fund. Or send a check, made payable to "Oliver Hazard Perry Rhode Island," to OHPRI, 29 Touro St., Newport, RI 02840. Please indicate that your donation is for the Captain Wagner Scholarship Fund. OHPRI is a 501(c)(3) organization and all donations are tax deductible.

Details on how to apply for the scholarship will be announced at a later date. For more information about SSV Oliver Hazard Perry, please visit http://www.ohpri.org or contact Jess Wurzbacher at 401-841-0080, info@ohpri.org. Follow OHPRI on Facebook and Twitter for current news and developments.