North American Rally to the Caribbean

Greater than the Sum of its Parts

On November 3, after two days of waiting for a break in the weather, 18 well-prepared sailboats left Newport, R.I. to embark on a nearly 1500 mile journey that, at its conclusion, will mark the completion of the 15th annual North American Rally to the Caribbean (NARC). Masterminded by Hank Schmitt of Offshore Passage Opportunities (OPO), the rally is free to its participants and supports the annual migration of East Coast boats heading south for the winter with either free or deeply discounted dockage at the designated rally ports (after Newport the rally stops in Bermuda, then finishes up in St. Maarten), fuel discounts, weather routing, regular on-water communication through Radio Net for SSB, and last but not least, social gatherings and camaraderie that lead to enduring friendships.

As Aristotle would affirm, the rally is a perfect example of the whole being greater than the sum of its parts, but a walk down "rally row" at the Newport Yachting Center before the boats departed also revealed that participants are as far removed from having a herd mentality as anyone could imagine.

Fran and Joyce Cichowski of Lucky Lady are sailing doublehanded in the NARC. (Credit OPO) Click image to download in high resolution

"My wife Joyce sought out the NARC Rally for comfort in numbers, but if we arrive at Bermuda and haven't used any fuel and we're still sailing strongly in the right direction, we're not going to stop," said Fran Cichowski, skipper of the smallest boat in the fleet, the Tartan 40 Lucky Lady. In their early 70s, the Cichowskis have lived aboard Lucky Lady for three years and spent last winter in St. John's Salt Pond Bay, serving as volunteer "Bay Hosts" for the USVI Park Service, in exchange for a free mooring. Unlike others in the NARC Rally, they have chosen not to bring aboard extra crew for the trip. "Some people think we're crazy, but it's a lot safer than you'd think if you're well prepared," said Cichowski, pointing out storm shutters on each hatch and each side window, extensive safety gear, and even a heating system that runs off the same diesel fuel as the engine. (The latter served the Cichowskis particularly well in Newport when chilly winds accompanied the front that delayed their departure.)

"Joining the rally is a way to share the experience and some knowledge and be a little safer," added Cichowski, explaining that, after a group weather briefing on Friday, the skippers were waiting for subsequent updates, and then they each would make an independent decision as to when to leave. (By 0800 on Monday, half the fleet had left the docks with the other half looking to follow shortly thereafter.)

Because of the inclement weather, two additional live-aboard families – one on Salty, a Bruce Roberts NY 65 that is the largest in the fleet, and the other on Tashtego, a Lord Nelson 41 – decided to fly their children to Bermuda rather than have them aboard for what could potentially be an uncomfortable trip. In both cases, Schmitt had pre-arranged for sailors from OPO's crew network service to lend a hand aboard. (OPO crew members sail at no charge to an owner and pay their own way to and from the boats on which they are placed.)

(left photo) Tashtego waits patiently with other NARC sailboats at the Newport Yachting Center; (right photo) Matt Warren (yellow jacket) will meet his family in Bermuda after they fly there and is getting assistance aboard Tashtego from professional captain David Lyman and crew member Christine Perakis (on right). (Credit OPO) Click image to download in high resolution

"I'm here for some more offshore delivery experience," said Tashtego crew Christine Perakis (Marina del Rey, Calif.), an entrepreneur who recently sold her business and is a veteran of offshore racing. "I'm exploring my next options, and this will place me down in the Caribbean where I 'm going to see what comes together for me."

Tashtego's captain for this trip, David Lyman (Camden, Maine), jokingly called Perakis a "yachting hitch hiker" while he explained how he embraces the spirit of OPO for creating opportunities for sailors from all different walks of life and levels of capability. Lyman himself has 70 years of sailing experience, 35 of them as a licensed captain, and this is his 12th voyage to the Caribbean.

Tashtego's owner, Matt Warren, on the other hand, only sold his house in Cleveland a year and a half ago to make a full-time commitment to a life at sea with his wife and sons, ages seven and eight. "We originally planned a clockwise circle around the Atlantic with stops in Europe, but we changed that when reality set in as to the time we can be away (two years) before having to get back to work. We had our goal of seeing whales, turtles, a volcano and dolphins...we've seen everything but the volcano, which we should get to see in Montserrat or St. Vincent."

Warren said it was a "neat coincidence" that Rob Swain, captain of the Jeaneau 54 Namaste, which is participating in the rally, was Warren's instructor in Tortola in 1998 when he took his first sailing class at the Steve and Doris Colgate's Offshore sailing School.

As for Salty's owner/operators Carl and Carly Zaniboni, ages 40 and 33 respectively, they have no deadline for sailing adventures aboard their aluminum-hulled home where their three kids – ages four, three and eight months – comfortably play with Legos in the main salon. "We don't own anything except this boat," said Carl, before Carly added: "We had a marine construction business in Mississippi and sold it just over a year ago. We had had enough, it was too stressful. We had said we were going to do it when we retired, but then we thought 'let's just do it now!'"

The Zanibonis called Schmitt looking for crew and decided to join the rally as an added incentive for Peter Berdoo (Atlanta, Georgia), New Yorker Quinn Harper and Wayne Whiting (Los Angeles, Calif.) to commit to the voyage. Harper, an OPO member, said he was matched with the Zanibonis because he was at a point in his life where he was thinking about "replicating their lifestyle," and Whiting, also an OPO member who graduated from college in March, said he's "not sure yet," but he studied engineering and is thinking about a future in mechanical engineering. This trip might help him decide, and if not, he'll simply add more sea miles to the approximately 1,000 he has put under his sailing belt already.

"For us this was more about finding crew," said Carl Zaniboni, "but it never hurts to be among 18 boats that are within a 100-mile range. If there was an emergency, I would go immediately to help someone, but still you make your own preparations; you don't rely on others."

Although he has had six different boats that he has sailed literally everywhere in the world with either family or friends, Pierre Guillaume, an ownerk/skipper from the south of France, calls himself an amateur sailor. He had been sailing his 60' aluminum Vaton-designed sloop Kris on the East Coast this summer when he met up with his old friend Thorpe Leeson (a Newport-based captain taking the Swan 61 Apsara south via the NARC). "He told me about the rally, and I thought it would be nice to join with them to go to Bermuda," said Guillaume, adding that an actual stop there would be dependent on the weather and he would ultimately continue to St. Barth. "A long time ago I did something like a rally from Hobart to Fremantle, organized the same way: it's good to meet people and go through the experience with the most information available."

The St. Georges Dinghy & Sports Club is hosting participants who choose to stop in Bermuda, while the IGY Marina Group is sponsoring the NARC finish in St. Maarten at Simpson Bay Marina. 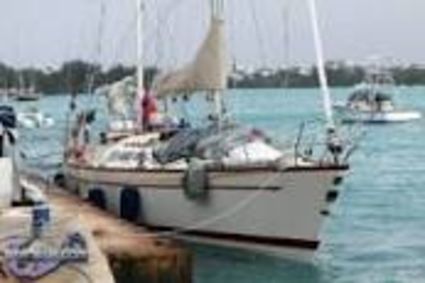