By AZBW
U.S. Department of Interior

Fishing immediately following the 2012 and 2013 high-flow events at Lees Ferry was excellent.

The U.S. Department of the Interior triggered a "high-flow release" at Glen Canyon Dam beginning Nov. 10 and lasting four days. The release was part of a long-term strategy that was announced in May 2012 by former Secretary of the Interior Ken Salazar to meet water and power needs, as well as to allow better conservation of sediment DOWNSTREAM and to better address the important resources in the Colorado River below Glen Canyon Dam.

The high-flow release, which is the third under the new high-flow experimental protocol, is designed to take advantage of sediment deposited by Colorado River tributaries as a result of recent rainstorms and Monsoons. Scientists have determined that the right conditions exist to conduct a high-flow release to benefit DOWNSTREAM resources.

The total maximum release from the dam reached approximately 37,500 cubic feet per second (cfs). Releases were then maintained at peak release for four days and returned to normal operations by the afternoon of Nov. 14. By comparison, the 2012 flow reached approximately 42,300 cfs and 2013 reached 37,500 cfs.

Fishing immediately following the 2012 and 2013 high-flow events at Lees Ferry was excellent.

Fishing at Lees Ferry, 16 miles DOWNSTREAM from the dam, has been good this year, although the condition of these trout has been subpar. This high-flow event should only enhance fishing opportunities. 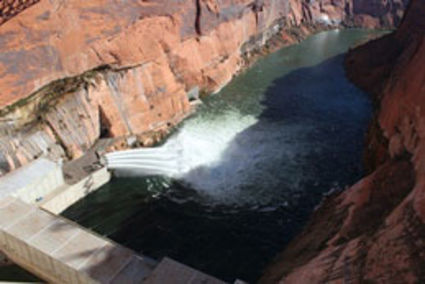 Although anglers were asked to watch out for floating debris such as leaves and branches the first day, they were assured that fishing could be fantastic thereafter. The effect of this release is to "cleanse" gravel beds and prepare them for trout spawning this spring.

More is being learned each year about how to use the operations of the dam to better conserve resources and enhance fishing opportunities.