Take A Couple Laps Around Lake Pleasant For The Governor's Cup

The first boat will be signaled to start at 11 am. The actual start time will depend on one's PHRF rating, with all competitors rated to finish at exactly the same time. First across the finish line wins. 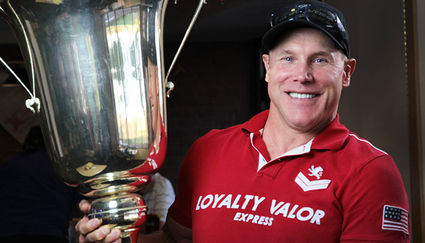 THE CUP --That's the huge trophy the winner will get to haul home and keep for the next year. Court Roberts lifts it in this picture, having won the Governor's Cup race two years ago.

The event organizer is Cruising Captain Tom Errickson, who's opting for a simple format this year: Start near the dam, sail around Horse and Balance Rock islands, then the unnamed island at the south end of the lake (an island he says is the only one in that area with vegetation), do most of it again (Horse, Balance, No-Name), and finish at the no-wake buoys at the north ramp.

After the race, everybody is invited to the Pleasant Harbor Marina Grill for a no-host bar and some munchies. Entry fee is $10, member or nonmember, and everyone is invited. The winner of the race will get to keep the gigantic Governor's Cup trophy (see picture) for the next year.

Erickson notes with a wink that this Governor's Cup will have Jan Brewer on the race committee boat. Yeah, really. But, this Jan Brewer might bear only a passing resemblance to the one occupying the Governor's office.