"Milestones like this release of endangered ferrets onto private land are significant accomplishments on the road to meeting Arizona - and national - recovery goals," said Larry Voyles, director of the Arizona Game and Fish Department.

"It's a true demonstration of the power of cooperative Wildlife conservation because ferret recovery would never have been possible without our partners at Babbitt Ranches, U.S. Fish and Wildlife Service, Phoenix Zoo, Navajo Nation and others."

Ferrets Depend on Prairie Dogs

Successful ferret recovery depends on the presence of healthy prairie dog colonies, a ferret's primary prey. To help ensure that the Espee Ranch maintains a robust prairie dog population, a new vaccine field trial was also initiated in conjunction with the ferret release.

Vaccine-laden bait developed in part by U.S. Geological Survey is being studied as a potential means for reducing the incidence of sylvatic plague in prairie dogs. Sylvatic plague can decimate entire prairie dog colonies. The new vaccine being field tested may also prove to have human health benefits if it is effective.

This release of ferrets onto private land in Arizona was made possible through a Safe Harbor Agreement, a special tool under the Endangered Species Act that encourages private landowners to conserve endangered species on their property with minimal land-use restrictions.

"Many ranchers accommodate endangered species needs into their livestock operations," said Steve Spangle, Fish and Wildlife Service's Arizona field supervisor. "A Safe Harbor Agreement allows them to participate in species recovery while simplifying and guaranteeing certainty for their business options in the future."

Arizona's first population of black-footed ferrets in the Aubrey Valley is doing well since being reintroduced in 1996 and is now self-sustaining, meaning it no longer requires the supplemental release of ferrets to keep the population healthy and growing. Establishing a second self-sustaining ferret population on the Espee Ranch would help Arizona achieve one of its recovery goals for conserving the species.

Babbitt Ranches has been involved in the discussions and efforts of the reintroduction of the black-footed ferret since the early 2000s.

As a landowner, developing our awareness, responsibility and obligation to landscape conservation, science and the health of Wildlife and Wildlife habitat, the owners and employees are committed to Babbitt Ranches' values of accountability to the land community," said Babbitt Ranches President Bill Cordasco.

"Additionally, the effort involving the vaccination of prairie dogs against plague is particularly significant as it may prove to have human health implications on a global level. This is particularly timely as communities east of Flagstaff have been made aware of a recent plague outbreak in prairie dogs."

In the late 1970s, the species was thought to be extinct until a small colony of approximately 120 ferrets was discovered near Meeteetse, Wyo. on Sept. 26, 1981. Disease outbreaks reduced that population to 18 individuals, which were captured in 1985 to begin a captive breeding program to save the species.

Because not all ferrets were captured and included in the survey count, the number of animals identified during the survey is a minimum population estimate, and the actual population could be larger. Arizona's potential contribution to ferret recovery is 148 adult ferrets. 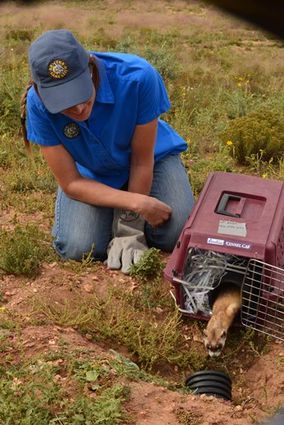 While they resemble domestic pet ferrets, black-footed ferrets are a different species and are the only ferret native to North America. They can grow to be up to 2 feet long and can weigh up to 2.5 pounds. One ferret can give birth to three to five kits each year.

Note: This historic release of endangered black-footed ferrets to a private working ranch is a first in Arizona under special federal conservation agreement