Thinking of Getting a Concealed Carry Permit?

Even in Arizona, there are many restrictions when you do not have a permit.

You may wonder why you would even need a CCW permit in Arizona, since we have Constitutional Carry. CCW stands for Concealed Carry or Carrying a Concealed Weapon.

What's the difference between Constitutional Carry and having a CCW? Well, in Arizona you are allowed to carry a concealed weapon without a permit. However, there are many more restrictions when you do not have a permit.

There are all kinds of laws about how close to a school you can be, whether you can enter a bar or a restaurant that serves alcohol, etc.

Without a CCW, it may not be legal for you to carry a concealed weapon if you leave the state. With a CCW, there are many states that honor your right. Also, if you want to carry a weapon to protect yourself while hiking in, say, the Grand Canyon National Park, you can't carry concealed unless you have a CCW permit.

Even with a CCW permit, there are many places that you are not allowed to carry a concealed weapon. Those places include schools and any place where a "no guns" sign is posted.

You will learn a lot about the legal ramifications about carrying a concealed weapon if you take a class. You will also learn about places that you can't carry whether you have a permit or not, and there are plenty of those places in Arizona - Indian reservations, for instance.

Something that many people don't think about is the mental side of carrying a concealed weapon. We took a CCW course with FAST (www.fast-az.com) and it was an eye-opening experience. Before the course, which took most of a day, I spoke with Sam at FAST on the phone.

He explained that the first couple of hours would be at Ben Avery at a private range, after which we would all meet at Cabelas for the rest of the class. He told me that we would need to be able to get 10 rounds within a certain area on a target at 10 yards or we would not be allowed to complete the course.

Well, I've been shooting since I was a kid, so the prospect of the shooting qualifier didn't bother me one little bit - until I got there. Turns out that I've not only been shooting all my life, I've been forming bad habits as well.

I learned proper stance, grip, control – even breathing. Sam, Samuel, and Zachary were awesome instructors. Sam Palmer is an active police officer, and his dad Sam is an NRA instructor. Son Zachary was helping out, and it was he who helped me calm down and shoot straight enough to qualify. Thank goodness for the practice sessions!

Intense In The Classroom

The classroom part of the course was intense. There are a lot of things to think about before you decide whether to carry a concealed weapon, and the FAST instructors make sure you understand exactly what you may be getting into.

A major focus was gun safety, both at the shooting range and after we got to the classroom. Maintaining control of the firearm is crucial. The two hours at the range were enough to convince me that I need a lot of practice if I'm ever going to be able to shoot straight under duress.

Sam told us that you will jerk and pull the trigger if someone throws or drops their weapon, so he taught us to keep our finger off the trigger until the moment we decide to shoot. You need to be able to shoot well enough to take out the bad guy without shooting innocent people behind or around him.

After taking the FAST course, we went out and bought a membership at an indoor shooting range so we can practice - a lot.

Too many people talk about "accidental discharge" of a firearm, Sam said. There is no such thing – you have to pull a trigger on purpose, and you are responsible if someone else picks up your gun and uses it.

This brought up the subject of how to carry concealed, especially for women. There are a lot of handbags made to conceal a weapon, but what if your bag is stolen? Now a bad guy has your gun - again, a lot to think about.

One of my favorite parts of the class was when Sam was telling us how not to need to use our weapons. He explained the color codes of awareness.

White, he says, is like wearing rose-colored glasses. People in code white are totally unaware of their surroundings. They assume that there are no bad guys and everyone is nice. You shouldn't even be in code white in your own house, he told us. People who live in the white walk around with their earbuds in, playing with their phones or focused on their companions, blissfully unaware of who or what is around them.

The place to be is code yellow. This means you are relaxed, but aware. You are alert and paying attention to everything around you, but nothing has piqued your interest.

This is something I had learned in martial arts classes, but it's way too easy to get out of the habit of being aware. It's something you have to make a conscious effort to do.

Code orange means escalated awareness. Something has alerted you - maybe a person who looks suspicious, and you can't see his or her hands.

Red is fight or flight. By then you don't really have a choice – your body physically reacts.

If You Choose To Carry

If you have made the decision to carry a weapon, you need to live in the yellow and if you go to code orange you need to Observe, Orientate, Decide, and Act. Sam says when you are out and about, make a habit of observing exits, and have a family code word.

If trouble looks as if it's starting, the code word should have the entire family heading immediately for the nearest safe way out. You are not obligated to hang around and shoot bad guys.

If you do ever feel as if you have no other choice, you need to be prepared for the legal consequences. A CCW course with FAST will teach you what to do if you have used your weapon: what to say (and not to say) to the police, how to act, what to say on the phone with 911, etc.

You will learn what the law says about Use of Force. Hint: It can be very subjective and a bit ambiguous.

As The Course Ends

The course ends with fingerprinting and filling out the CCW permit applications. While this is going on, each student goes into another room one at time. You are given a laser pistol that the screen can detect but you can't see. You are shown a couple of scenarios, and you have to decide when and if you are going to draw and use your weapon.

It's very intense. I waited too long and a jewelry clerk died. I wasn't obligated to save her, but I could have. That's the kind of stuff you need to think about before you stick a gun in your waistband.

After the scenarios, the instructors were the police, asking what the suspects looked like, what happened, where they went, etc. It's amazing how much you don't see even when you are really focused on an event.

The FAST instructors also went over many past cases where citizens had used deadly force to protect themselves and explained to us what happened. They went into great detail to help us prepare ourselves in case we ever have to make that decision. Nobody can do it for you, but at least they can help you prepare. 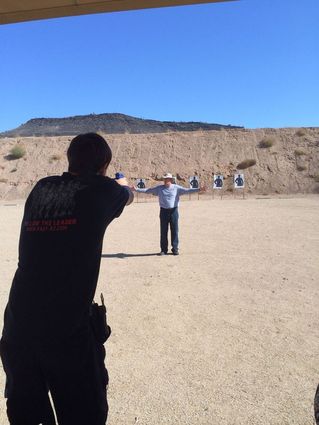 FAST -- Zachary and Sam are shown demonstrating how fast an attacker with a knife can get to you. On average, an attacker can before you can draw and shoot if he within 21 feet.

They explained about the physical things that happen when you are under extreme stress and fear - motor skills deteriorate, etc. They went over how to react in home invasions, what to say and do when you call the police, and talked about various holsters and even tactical flashlights and their uses.

The instructors mentioned my note taking several times (I didn't tell them I'm an outdoor writer), but I'm really glad I wrote so much stuff down. There was way too much info to absorb all at once, and I've re-read my notes and the information I downloaded from them many times. I can't over-emphasize the importance of taking a CCW course if you are going to carry a concealed weapon.

Even if you decide not to get the permit, you need the information. As Sam says, FAST isn't the shortest course or the cheapest, but in my opinion, they are one of the best. If you do decide you want to carry, carry responsibly.