BULLHEAD CITY, Ariz. –– trout stocking south of Davis Dam has been on hiatus for nearly a year, but that changed on Oct. 1.

trout from Arizona Game And Fish hatcheries, and raised by the U.S. Fish and Wildlife Service at the Willow Beach National Fish Hatchery, comprised the first stocking south of Davis Dam since late 2013.

"This is great news and a fantastic opportunity for anglers on the Colorado River," said Matt Chmiel, the Fisheries Program manager for the Game And Fish Region 3 office in Kingman. "While fishing in the area has remained strong, trout have been recognizably absent for nearly a year."

On Nov. 21, 2013, the willow beach hatchery conducted an emergency stocking of 11,000 rainbow trout when the low lake level made it impossible to draw in water due to a damaged lower-level pipeline. This fact, along with additional federal budget cuts, resulted in the closing of the sport fish part of the hatchery.

In early 2014, Game And Fish provided the national hatchery with 22,000 sub-catchable rainbow trout to raise to a catchable size while lake levels were high enough for the one functioning pipeline to draw in water.

The Time Has Come

"However, the lake level will soon be dropping and the time has come to stock the fish," Chmiel said. "The timing is critical. All 22,000 fish must enter the river before water levels drop below the intake valve."

Chmiel explained stockings will continue for several weeks in October at Rotary Park and Davis Camp.

"But there's no need to focus on just those two locations," he said. "trout disperse quickly and many areas along that stretch of the river will work."

For rainbow trout, Chmiel said small spinners and PowerBait are often effective, although marshmallows can work.

"Fishing is just a great way to relax and spend some time with the family with few interruptions," Chmiel said. "Getting kids outside and away from the computers helps create an important connection with the outdoors."

A Fishing License is $37 for in-state residents and $5 for all youth ages 10-17. The license is good for trout and is valid for 12 months. 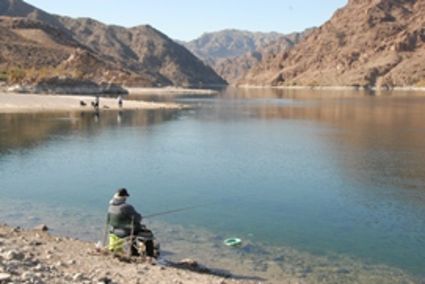 For a statewide fishing report, log on to the Game And Fish Department's Web site at azgfd.gov. Licenses are available at the any of the Game And Fish regional offices or headquarters as well as at license dealers throughout the state and online at http://www.azgfd.gov/fishing.