Unlike an automobile, recreational boats have special safety needs when it comes to refueling. Stern drive or inboard powered boats have closed engine compartments where volatile gasoline vapors don't easily dissipate, and older gasoline-powered boats are the riskiest to refuel as their brittle fuel hoses can crack, leaving gas in the bilge after a fill-up.

Boat Owners Association of The United States (BoatUS) has these ten tips to ensure a non-eventful refueling:

Disembark: As soon as you're safely tied up to the fuel dock, everyone should hop off the boat.

Turn off everything: Shut down all engines, electric motors and galley stoves and turn off the battery at the main switch.

Button her up: Close all compartments, cabin doors, ports, windows and hatches.

Don't smoke: Ensure all smoking materials are fully extinguished – and don't leave a stogie smoldering up on the bridge.

No static: Keep the fuel nozzle in contact with the fuel deck fill to prevent static sparks (and don't confuse the fuel fill with a rod holder, water tank or holding tank fill, which happens more often than you think). Stay with your boat, and don't use the "hands-free" clip. Portable tanks should be removed and placed on the fuel dock before filling.

Don't overfill: To prevent fuel from spewing from the fuel tank vent, don't fill the tank to the very top – try to know how much fuel you need, and keep an absorbent pad handy. A tank that is overfilled can allow fuel to blowback or expand and be forced out of the tank vent as temperatures rise or seas kick up.

Clean up: Replace the tank cap, open all hatches and doors, wipe up any spills and dispose of any fuel soaked absorbents properly -- hanging them on a rail to allow the gasoline to evaporate may seem like a good idea -- until a guest decides to smoke.

Use the blower: Operate the bilge blower (if equipped) for at least four minutes.

Sniff test: Smell the bilge and engine compartment before starting the engine. Note that a bilge blower won't remove vapors from spilled gasoline, so use your nose first before you turn the key.

Investigate any issues: If the engine won't start right up after refueling, stop cranking and investigate. In most cases of refueling-related accidents, the operator tried multiple times to start the engine before an explosion occurred. 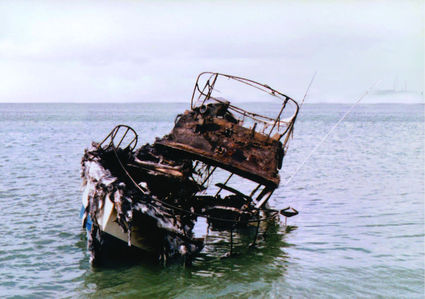 FUELING FIRE -- This boat caught fire shortly after refueling. Don't let this happen to you. It does not have to if you follow at least 10 safety tips at the fuel dock.