This is the second of a two-part series about the exhibit in the Cave Creek Museum.

The mill is about 90 percent complete. Most of the parts were on the mill, but some of the components needed to be added to the original mill. This article will go over some of the important missing parts and what their function is on the stamp mill.

The crew left Phoenix at 05:00 and arrived at Castle Dome at about 08:00. The group consisted of Allen Armstrong, owner of Castle Dome and Millman in training; Charlie Connell, Millwright and project lead; Roger Camplin, Millwright for Cossak 20-Stamp Mill, Superstition Mountain and other projects; Chuck Messersmith, Millman at the Cossak 20-stamp mill at Superstition Mountain and other projects; and Hank Smith, Millman at the Golden Reef 10-Stamp Mill at Cave Creek Museum and expert single-cylinder engine mechanic.

The following work was completed in mid-August with the outside temperature of 107° F. The function and purpose of each of the components worked on will be discussed in this issue.

This is a very important device that allows the operators to perform maintenance on the stamp mill including removing the stamps, camshaft and changing the shoes on the end of the stamps. The components are too heavy to be lifted by hand, so the trolley and chainfall make it possible to lift and move the components.

Most of the free milling gold is very small and you need to crush it down to the consistency of sand and the screen only allows the small particles to pass to the sluice table.

There were no jackstands with the mill when it was obtained. The jackstands are devices that hold the stamp tappets above the rotating cams when the mill is started up.

The team stopped at about noon to take a break and get some lunch. They retired to the "cabin," one of the few buildings that has air conditioning. As you remember, Castle Dome is totally off the grid and all power comes from the solar panels and the wind generators that are on site. After a relaxing time, the crew went back to work.

You cannot start the mill with the stamps engaged, since it takes too much energy to start lifting the stamps from a dead stop. The following are the operational terms used for starting and stopping the mill:

The jackshaft is an important device that reduces the engine RPM down to the speed that is recommended for an operating stamp mill. It is basically a shaft that has a different size pulley on each end and connects the engine (driver) to the bull wheel through this shaft.

These pulley arrangements were used extensively in the early days of the stamp mill to adjust the speed for various components that the engine would power. Many times they had only one engine and it had to supply power to a primary crusher at about 250 RPM, a shaker table at about 40 RPM and the mill at 60 RPM. This was all achieved through the use of jackshafts and pulley arrangements.

The dies are steel devices that are installed in the bottom of the mortar box. They act as an anvil that the hammers (stamps) hit on to crush the ore. This machine did not have dies when it was acquired.

Originally they were made from cast steel, but there were no foundries in the area that could forge the dies. Instead, 6 ½" bar stock about 3" thick was used and welded onto a 1" square plate to make the base. The three dies were installed in the bottom of the mortar box as shown below. 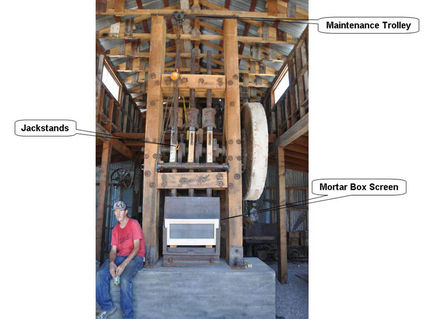 This engine was obtained from Huntington, W.Va., and is a 12 Hp Witt single cylinder engine that had been restored and is in running condition. This is more than adequate to operate the 3-stamp mill and is about the same age as the stamp mill.

Normally it takes a little over 1 horse. In this case, you would need about 4 Hp to run this mill.

Originally, many of the mills used Steam Engines or Pelton water wheels to run the mills. There was not always wood or water to run these engines, so they used single cylinder "hit-miss" engines to run the smaller mills.

This particular area has no water and wood is very scarce so it would have been a good candidate to supply power to the 3-stamp mill.