The Bassmaster Elite Series Fishing Tournament will be at Lake Havasu in May 2015. 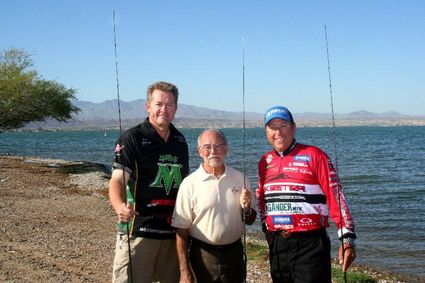 The Lake Havasu City Convention & Visitors Bureau (CVB) has announced that a nationally televised Bassmaster Elite Series fishing tournament is coming to Lake Havasu State Park on May 7-10, 2015. It will be the largest, most prestigious fishing tournament ever held in the State of Arizona with crowds of 5,000 spectators anticipated each day and a projected local economic impact exceeding $1.5 million.

"We can all be proud that our prime fishery will be put in front of fishing fanatics all over the world," said Doug Traub, president/CEO of the CVB. "We expect that the entire town will be packed with fans who are here to see the top 100 elite anglers in the world compete for a series-wide top prize of $100,000.

"We also thank all of our partners who came together to bring this world-class event to Lake Havasu for the first time. It's taken nearly two years of effort to bring the Bassmaster Elite Series back to the western U.S."

The tournament will be covered in a one-hour program televised on the ESPN2 and Outdoor Channel networks. Thousands of Bassmaster fans from surrounding states are expected to attend, as California has the third highest number of B.A.S.S. (Bass Anglers Sportsman Society) members in the country.

Weigh-ins will take place at Lake Havasu State Park each day. Entrance to the event will be free. The Elite Series has been absent from the western United States since 2010 (competitors fished California's Clear Lake and the California Delta).

"It's been more than a decade since a Bassmaster tournament was held on Lake Havasu, and according to reports we've received, the fishing there is better now than the previous times we've fished the lake," said Bruce Akin, B.A.S.S. CEO. "In fact, Bassmaster Magazine ranks Havasu No. 20 on this year's 100 Best Bass Lakes list, so the Elite anglers are in for a treat next year.

"We're also pleased to be taking the Bassmaster Elite Series to Arizona for the first time," Akin added. "The many thousands of B.A.S.S. members and other fans in the region will be able to see the very best anglers in the world compete on a first-rate fishery unlike any they've fished on since the Elite Series was launched."

Adds Trip Weldon, B.A.S.S. Tournament Director, "It's always exciting to travel to a new venue because we see great crowds. Lake Havasu is a very unique spot in the country, and the fishing has really improved from what it was years ago. Our anglers are looking forward to competing out West again."

Production of the TV episode will require the work of nearly 30 broadcast staff members in the field and studio. They will shoot approximately 70 hours of video to produce the one-hour telecast. Footage will be taken on the water, combined with aerial footage and graphic animation. The Bassmasters television show is among the highest-rated outdoor programs on air.

The Bassmaster Elite series is the premier fishing league in the world. It is comprised of eight different tournaments held throughout the year in locations around the country. Each invitation-only competition fields more than 100 of the world's most elite Bass anglers who vie for a top prize of $100,000; the top 50 anglers during the tournament will receive at least $10,000 each for their efforts. The series culminates in the Toyota Bassmaster Angler of the Year Championship.

B.A.S.S. emphasizes the importance of protecting fisheries. It utilizes two live release boats with aerated holding tanks to keep Bass caught at the tournament healthy until they are released in their home fishery at the end of each competition day.

The CVB is heading up a bid to bring the tournament back to Lake Havasu City again in 2017.

Learn more about Lake Havasu City at http://www.golakehavasu.com and about B.A.S.S. by emailing Helen Northcutt at hnorthcutt@bassmaster.com.

B.A.S.S. is the worldwide authority on bass fishing and keeper of the culture of the sport. Headquartered in Birmingham, Ala., the 500,000-member organization's fully integrated media platforms include the industry's leading magazines (Bassmaster and B.A.S.S. Times), website (Bassmaster.com), television show (The Bassmasters on ESPN2), social media programs and events. For more than 45 years, B.A.S.S. has been dedicated to access, conservation and youth fishing.