More than 200 leaders in the recreational fishing and BOATING industries are asking Senate and House members by way of a letter, to support key policy changes to saltwater recreational fisheries management in the upcoming Magnuson-Stevens Fishery Conservation and Management Act (MSA) reauthorization.

The MSA is the primary law governing federal saltwater fisheries management. The National Marine Manufacturers Association (NMMA) and the American Sportfishing Association (ASA) spearheaded this effort, which includes boat builders, engine manufacturers, and fishing tackle manufacturers and retailers. The clear message for Congress is this: Recreational fishing and BOATING must be an integral part of the MSA reauthorization.

Attention Has Been Lacking

Despite the social, economic and conservation benefits that recreational fishing provides to the nation, the MSA and the resulting federal fisheries management process has never paid due attention to how best to meet the needs of saltwater recreational anglers. The letter specifically encourages Congress to integrate the priorities described in the landmark report, A Vision for Managing America's Saltwater Recreational Fisheries, into the MSA.

Produced by the Commission on Saltwater Recreational Fisheries Management, better known as the Morris-Deal Commission, the report was introduced this past February to media and anglers during the Progressive Miami International boat Show. The report is supported by the nation's leading recreational fishing and BOATING organizations and outlines the key recommendations that would benefit our industries.

In a continued effort to educate Congress about the need for recreational fishing and BOATING's inclusion in the MSA, NMMA and ASA recently led a Congressional BOATING Caucus briefing specifically dedicated to this issue. Representatives from both organizations, along with the Coastal Conservation Association and the Theodore Roosevelt Conservation Partnership, gathered on Capitol Hill to address Members of Congress directly and to educate all attendees about the importance of supporting recreational fishing and BOATING through legislation.

The economic imprint of recreational BOATING and saltwater angling in the U.S. is considerable. Anglers contribute more than $1.5 billion annually to fisheries habitat and conservation via excise taxes and license fees alone. In 2011, approximately 11 million Americans saltwater fished recreationally, spending $27 billion in pursuit of their sport. 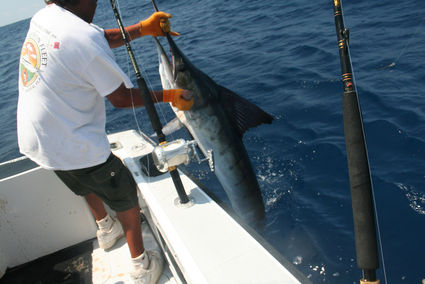 ASA and NMMA are committed to continuing their work together on this important issue impacting both industries. For questions about the letter, Hill briefing or the report, A Vision for Managing America's Saltwater Recreational Fisheries, contact Lauren Dunn with the National Marine Manufacturers Association at ldunn@nmma.org, 202-737-9752 or Mary Jane Williamson with the American Sportfishing Association at mjwilliamson@asafishing.org, 703-519-9691, x227.