Striper Boils Are Just Getting Started

Striper fishing has settled into a predictable pattern over the length of Lake Powell. Each morning striper schools come to the surface chasing Shad schools. The trigger is first light which makes Shad form into tight schools following a night of happy wandering as individuals.

Shad feed on plankton after dark but do not maintain the school mentality in low light. When visibility improves in the morning, each Shad wants to be in the middle of the school while those Shad on the outer edge of the school bear the brunt of attacking game fish.

This daily ritual helps explain why Shad like to swim in big schools. It also explains why Stripers feed at such high speed. Stripers don't have to be real fast - just fast enough to get to food before their school mates.

Stripers often race each other during the feeding process. That is why a striper school can be within casting distance one minute and over 100 yards away the next.

We were surprised to see impressive striper boils on Sept. 10 morning despite the full moon. The need to feed on Shad is more important to Stripers than the unexplainable weirdness that generally goes with bright nights when the moon is at its peak.

The lakewide pattern is very specific. Stripers attack the first Shad school found in morning light. That could be as early as 5:30 a.m. (MST) but more typically at 6 a.m. The skirmishes tend to be in the same locations each morning. Each boil is very quick and may last for only 1-2 minutes with a strong boil staying up for 5-10 minutes.

The key is to run at full throttle until multiple splashes are seen. When in casting range, drop off plane and cast as quickly as possible over and as close as possible to the swirling fish. Each time the lure enters the feeding school, it will be whacked by attacking Stripers.

When the school sounds, the fun is over and it is time to hit the throttle while looking for the next boil. There are usually many quick boils in a favored area so the run is not that far.

The feeding intensity is strongest from 6-7:30 a.m. and then it goes silent. The next daily feeding activity is at supper time as Stripers come back to the top during the last hour of daylight.

It gets dicey when the sun sets and Stripers are still feeding. Hopefully you can camp near the action. If not, make sure to have a GPS bread crumb trail on the graph to increase the odds of the boat's returning to the right spot after dark.

Those favored feeding areas include the main channel from the mouth of Warm Creek to Antelope Point Marina, Cha Canyon to Neskahi Canyon in the San Juan, Escalante main channel, rincon to Slick Rock Canyon, and Castle Butte to Fourmile Canyon. I am sure there are many other boiling Stripers that we do not know about, but these are the areas where recent morning and evening boils have been reported. 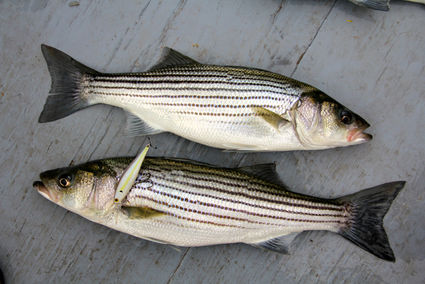 IN THEIR PRIME -- Lake Powell stripers are in prime condition. These fat stripers were caught in surface boils this week that are occurring daily from dawn until 7:30 a.m. and then again during the last hour of daylight.

The best lures this week were shallow-running crankbaits with a white background and a chartreuse stripe on the side. We did well with a Lucky Craft Pointer in chartreuse Shad and a Shad Rap in Helsinki Shad color.

Top-water lures are so much fun and they get stroked and petted while in the boil. But, only occasionally do the Stripers actually get hooked up on a surface lure. The opposite result occurs when a white Rattlin' Rap or a ghost Lucky Craft LV 100 swims into the school. Shallow runners are working much better than surface lures.

Striper boils are really just getting started. They are expected to improve each week from now until mid October.