His Adventures On The Water Are Still Amazing

DeFir had a shop in Phoenix on Cave Creek Road back in the '80s.

Our thanks to Bill Wier, of Marine Wholesale, for reminding us of the passing of Ray DeFir several years ago. Wier also reminds us that DeFir had a shop in Phoenix on Cave Creek Road back in the '80s and that he was well known for his New Years Day skiing exploits.

"How many people do you know who can ski 100 mph on the Columbia River in the winter time? Or want to for that matter," said Wier.

Many of you may know Ray from his Rayson craft days. Before that, he was a pioneer in building his own mahogany inboard boats for speed and endurance skiing. We have included a picture of his 1962 16' boats with a 394 Olds that reportedly can still run away from the best of the new tournament ski boats.

This record has not been broken.

Ray's water activities began in Oregon when he was 13. One of Ray's first projects began with plans for a diving bell found in Popular Mechanics magazine. He and his brother built the diving bell out of a water tank and took turns walking on the bottom of the lake and pumping air to each other with a tire pump.

His next boat experience took place when he discovered a 38-man life boat partially buried in the mud in Smith Lake. He and his brother patched up the life boat and used it on the river. 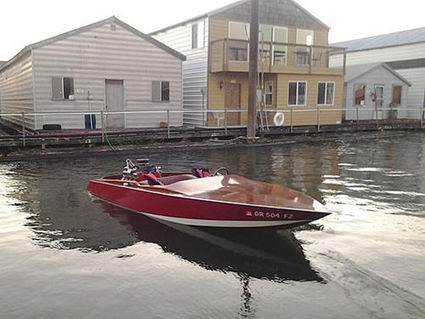 In 1946, in a war-surplus yard, he found a P-38 airplane auxiliary belly fuel tank that was flattened on the bottom side. He bought the belly tank, cut out the flat section, put a 10" keel on the bottom of it, and paddled his new aluminum boat around the slough.