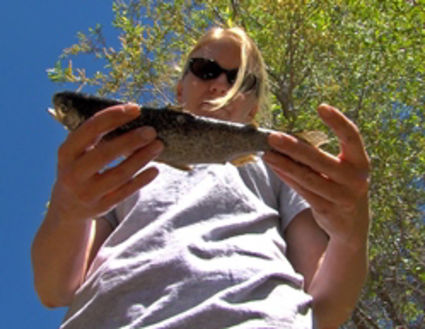 In the tiny Payson community of BEAVER Valley, hatchery-raised rainbow trout hover in pools of the east verde river, or perhaps enjoy the shade of a shoreline undercut. Then there's a different sort of rainbow trout in these waters – ones that mill around with a pair of protruding, lightweight tags.

These fish have undergone surgery.

Since April, Arizona Game and Fish Department biologists at the Tonto Creek Hatchery have begun implanting the lightweight wire tags into a small portion of rainbow trout to determine the fate and movement of stocked hatchery trout.

Now far removed from surgery, recovery room-like buckets of water, and finally their hatchery runways, many tagged rainbows are wild and healthy in the East Verde. A tiny tag protrudes from the back, another from the belly.

The community is abuzz about these high-tech fish.

Ask the Kreimeyers. Also near the banks of the East Verde in BEAVER Valley lives Roger and Linda Kreimeyer, married 49 years. They're at the heart of a community engaged by the Game And Fish research project.

"I get phone calls all the time: 'Did you see the stocking truck today?'" Linda Kreimeyer said. "It's a fun event for families here. Everyone is curious about tagged fish. They want to see these mechanical fish."

She laughs, then gazes down toward the tributary of the Verde River that begins at the Mogollon Rim near Washington Park, then flows mostly southwest through Gila County and the Tonto National Forest.

Game And Fish biologists are still asking anglers who catch a tagged fish to return the tags. The Department in April issued a news release asking anglers who catch a tagged trout to call the number on the colored tag (623-236-7538) with the location of the caught trout, identification number on the colored external tag, and date the fish was caught.

After all, future generations of anglers depend on such conservation efforts.

Those in BEAVER Valley have taken notice of the project. It might be a stocking truck pulling up to the tiny creek, even a Department biologist or volunteer pointing a large antenna at the river to detect the position – and, in turn, fate or movement -- of a tagged trout, part of the technology of telemetry. Sometimes, an angler will catch one of these "robot fish," which Game And Fish biologists say are safe to eat.

It's one of the more unique and lengthy projects anglers might witness.

"We're getting phenomenal results," said Arizona Game and Fish Department Fisheries Research Biologist Jessica Gwinn. "And we're very excited that the angling public is interested in our project and participating with us."

Game And Fish biologists will survey the east verde river from 2014-2015, and then perform the same research methods in the East Fork of the Black River from 2015-2016.

As for the project on the east verde river, conclusions are likely to form in 2017 or 2018. 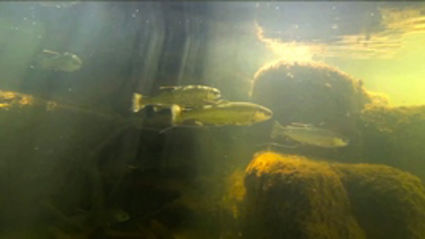 "We want to follow the trout through several seasons," Gwinn said. ""Early project results indicate a great return on the tags."

Around BEAVER Valley, anglers seem to understand their role in conservation, showing their passion for Wildlife in part by engaging in the heritage-rich sport of fishing.