The Arizona Game and Fish Department is investigating the poaching of an antelope buck that was left to waste in a field, and the Department needs assistance in finding the individuals responsible.

On July 2, at around 4:30 a.m., gun shots were heard near the Windmill Ranch off Forest Service Road 231, known as Woody Mountain Rd. Also that morning, a person reported seeing two antelope bucks off the road.

In that same area, but not at the same time, the reporting party also saw two people standing near a gold four-door sedan with a firearm that appeared to be a rifle.

"This poaching is a loss of Arizona's Wildlife and that of a species that is somewhat fragile due to coyote predation on antelope fawns and habitat fragmentation," said Wildlife Manager Will Lemon. "This case is just another example of how poachers act and how quickly they can illegally shoot Wildlife. The department often relies on the public for information in solving these cases."

Anyone with information regarding this case can call the Department's operation game thief Hotline toll free at (800) 352-0700 or use the online form at http://www.azgfd.gov/thief.

Callers should provide case number 14-001798 when calling. All calls may remain confidential upon request. A reward of up to $750 may be available for information leading to the arrest of the violator(s). 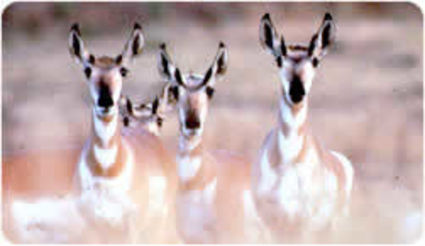 Poachers are thieves, not responsible hunters. The latter sportsmen and women are paying for licenses and tags that contribute to Wildlife conservation and management in Arizona.

The Game And Fish Department is also investigating an elk poaching that took place at the end of June along The Rim Road on the Coconino National Forest. For more information about this case, go to the operation game thief section of the department website at http://www.azgfd.gov/thief.