It Is Time To Take A Kid Fishing 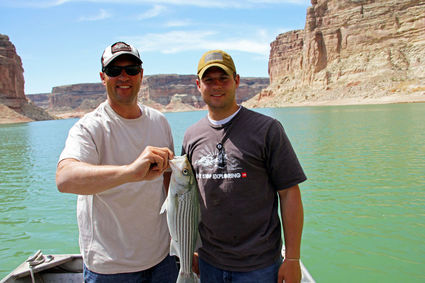 LIFETIME MEMORIES --Weston Gleave from Bountiful, Utah, enjoyed a striper fishing trip with his father to Lake Powell. shortly after returning from military service. Memories from successful fishing trips where parents share these experiences with their children will never be forgotten. It is time to take a kid fishing.

Lake Powell has topped out at 3609 MSL after rising 35 feet this year. That means Castle Rock Cut is 27 feet deep and should remain passable for the rest of 2014.

Fish are more concerned about habitat. New green brush went under water at 3603 and will provide Bass habitat and Shad shelter for much of the summer. The Shad crop is a bit above average. Adult Shad continue to spawn in July when in some others years they would have finished spawning by now.

That is a positive occurrence. The size of the Shad population will be determined with trawl sampling during dark moon phase later in the month.

Blue collar Stripers in the southern lake have settled into a daily routine. They go to work at first light and chase Shad for an hour or two. Then they take a break until mid day when the most serious Shad chasing occurs.

On calm days, surface feeding action is common in the main channel as small striper schools are consistently seen from Padre Bay to Rock Creek and Dungeon Canyon. Surface boils settle down again in the afternoon and then are repeated briefly in the evening.

The imminent arrival of full moon will push most feeding activity into late afternoon and evenings with quiet mornings.

Full moon will have less impact in the northern lake where water is clearing as runoff diminishes. Surface feeding is ramping up in the backs of canyons as Shad are becoming visible to Stripers.

Stripers are susceptible to trolling while relaxing at depth between surface excursions. A few fish can be caught while waiting for the next surface explosion. Trolling success is about two to three fish per hour in the southern lake compared to 10 fish an hour in the north.

bass fishing success is increasing lakewide as water level stabilizes. Lots of fish are caught with plastic grubs and tubes but the average Bass size is small. Both Bass and striper populations are rebuilding after low water and poor habitat during the past two years.

Catfishing success is increasing as spawning concludes. catfish are patrolling the beaches in the evening looking for an easy meal. It is easy to invite them to dinner by putting a few table scraps on a hook which are then cast to the sandy bottom behind the boat.

Surface fishing for Stripers combined with small Bass along the shore and catfish on the beach provide ideal conditions for teaching children how to fish. The key element in fishing instruction is to actually include fish as part of the training. Fish are now available for kids to catch while visiting Lake Powell on a family vacation.

Make sure to bring fishing equipment for another fun activity while at the lake.