Lessons Learned From A Trophy Striper 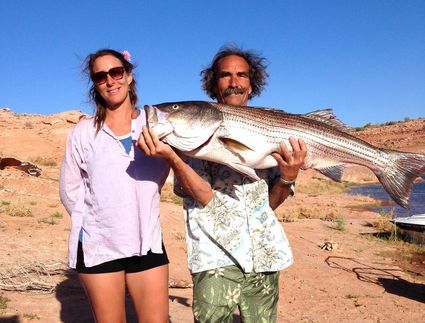 INTERESTING FISH FACTS -- Adam Jones and Deborah Williams found a trophy striper thrashing on the surface near Warm Creek. They tried to save the fish but it died due to post-spawning stress. It was then turned over to Utah Wildlife resulting in the discovery of many interesting facts about trophy stripers in Lake Powell.

Early one Saturday morning, a call came stating a big striper had just been caught at the mouth of Warm Creek. It took about 20 minutes to get there but we soon found a boat at the corner of Warm Creek and the main channel.

Adam Jones and Deborah Williams were right there and when we got in range, Adam held up a huge striper. We got out of the wind and headed to shore where we could get the full story.

Death Of A Big Fish

Adam and Deborah were out at dawn fishing along Warm Creek Wall on June 14, when they noticed a surface disturbance. As they got closer, it proved to be a giant striper thrashing on top. They got close enough to net the fish and then tried to resuscitate the fish and release it.

But it was to no avail; the big fish succumbed within minutes of capture. They measured the fish using hand widths and came up with 45 inches. That's when I showed up and began discussing options.

Adam would like to have had the fish mounted as it was the biggest fish he ever "caught." But, it is entirely possible to make a fiberglass mount by just supplying dimensions and a picture to the taxidermist.

It was determined that I would take the fish, determine exact measurements, and perform a necropsy to determine cause of death. I put the big fish on ice and headed back to the lab.

This fish was 44 inches long and weighed 28.75 pounds (certified scales) with a girth of 25.5 inches. Most striped Bass of this length exceed 30 pounds but this one had an empty stomach except for three carp spines.

It had been eating recently but the mostly empty stomach, which was 14 inches long, did not add an extra pound or two which is common when the stomach is full. That also explains why the girth was 2 inches smaller than other Stripers of this length.

The cause of death was likely spawning stress. The 10-inch long ovaries were spent suggesting this fish had just completed spawning. Full, ripe ovaries can weigh 2-3 pounds which would add more weight and girth to this fish.

Striped Bass are a marine fish that are adapted to life in the ocean. As they mature, they seek water temperature in the mid 60s. Juvenile Stripers can survive well in warmer water. This genetic change with age, separates large and small Stripers and protects small fish from predation by larger ones.

If adult Stripers are not large enough to eat 1-pound carp, and catfish then they become malnourished. This explains why there are so many large, lean fish in certain years.

But, this trophy fish was healthy and well nourished. Striped Bass are surface spawners so they must abide the warm water during spawning. If they stay in 75+ degree water for an extended time, lactic acid builds up in the muscles beyond the capacity of the fish to recover. This is the cause of death of most trophy fish that are found dead on the surface.

My best guess is that this fish succumbed to post-spawning stress and excessive lactic acid buildup in warm water, which prevented the fish from diving into deep water.

Scales were read to determine age. This fish was similar to other trophy striped Bass from Lake Powell. The age was 10 years, which seems to be the maximum life span of large Stripers. Striped Bass that do not leave the school seldom live longer than five years, while trophy fish live twice that long.

Large Stripers are loners that hunt catfish, carp, and walleye in the cooler water. They do come into shallow water to eat Shad on occasion when Shad numbers are high and hunting forage does not require a long stay in warm water.

Thank You For Sharing

I want to thank Alan and Deborah for sharing their fish with us so we could learn more about the rare trophy fish that do swim in Lake Powell.