Ship Ahoy! - A House With A View

A former cargo ship, the Benson Ford, now sits hanging over a cliff on Lake Erie and serves as a holiday home. 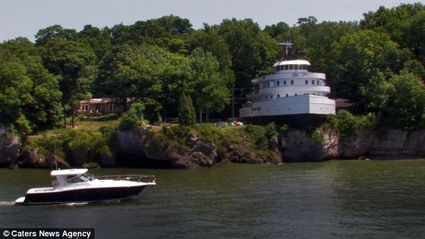 It originally transported iron and coal for the Ford Motor Company. She was built in 1924, and was decommissioned in 1981 after nearly 50 years of service.

She was left to rust for four years until Frank J. Sullivan bought it, had the ship's forecastle separated from the ship's hull, and had it transported to its present site on an 18-foot cliff jutting above and overlooking Lake Erie, where Sullivan tried to turn it into a hotel, which he was denied permission to do.

He then sold the place to father and son, Jerry and Bryan Kaspar, who turned it to their impressive four-story, 7,000-square foot holiday home. It includes five bedrooms, a captain's office, and a living room with a panoramic view of and across Lake Erie; they modernized it by adding a garage, a game room, a bar, a state-of-the-art kitchen, and four bathrooms.

Looking over the bow, one can see that the former-ship-turned-holiday-getaway looks as if it is still sailing because of the way it had been placed to extend over the cliff facing Lake Erie.

Tourists are allowed to take a guided walk around the former-ship-turned-holiday-home However, anyone who has a fear of heights would most likely prefer to not look down when walking out onto the ship's bow. 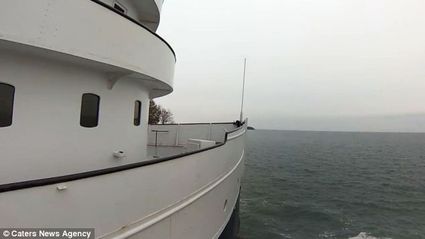 Bryan Kaspar says: "Everyone who sees it is intrigued to look inside and I think everyone who looks inside is amazed at the woodwork throughout the ship. Also, from the bow, it almost feels like you are on the water because of the way it is positioned and its close proximity to Lake Erie."

Videographer Nick James, who has led walking tours of the place, says: "The most incredible part is standing at the helm and the way the boat hangs over the cliff make it actually feel like you are out on the open water.

"Also, I love the history that is still all around in the former Benson Ford. In the parlor, you can just imagine Thomas Edison and Henry Ford sitting smoking their cigars - and it feels as though you step back in time and they could appear at any moment.

"Last, I love the deck on the fourth floor; it's a great and amazing place to enjoy a cocktail overlooking the lake and the nearby cliffs - and to watch the sunset."