By AZBW
Friends of Lake Powell

Lake Powell On Its Way To A40-Foot Rise

PAGE, Ariz. – Lake Powell is rising a foot per day as abundant snowpack in northern Colorado and Wyoming continues to feed the Colorado and Green Rivers.

Runoff into Lake Powell that began in earnest in the middle of May has reached 60,000 cfs leading to a rapid rise in lake level that will continue through the month of June. That is good news for boaters. The rising water has opened the Castle Rock Cut near Wahweap Marina. There is now safe passage for boats of all sizes including tour boats destined to Rainbow Bridge and Navajo Canyon.

The Bureau of Reclamation has projected that lake elevation will peak near 3,616 feet in early July and end the water year on September 30 near 3,610 feet. That is an elevation 26 feet below Lake Powell's 50-year average for the date.

The most probable inflow scenario provided by the Bureau projects that Lake Powell could rise an additional 10 feet in 2015 even if water releases DOWNSTREAM to Lake Mead increase to 9 million acre-feet as is being anticipated for water year 2015 beginning on October 1, 2014.

Some additional good news is that there are climate indicators that could signal a return to more normal Colorado River runoff patterns following 14 years of extreme drought, said Paul Ostapuk, Friends of Lake Powell spokesperson. 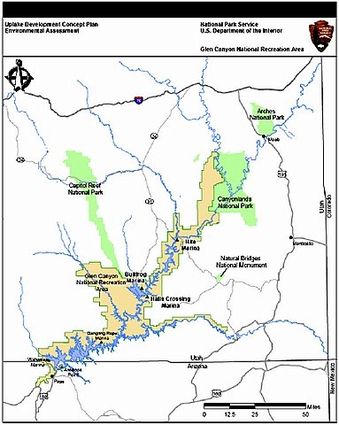 "The eastern Pacific Ocean is beginning to warm significantly and Nature magazine recently reported there are signs of changes in the Atlantic Ocean too. If the Gulf Stream continues to weaken," he said, "it would cool the North Atlantic. Fluctuations in climate are largely influenced by oceanic currents so changes in one or both oceans could help drive a reversal of the persistent drought conditions across the Southwest U.S. that began abruptly in 2000."

For more information visit the Friend of Lake Powell on Facebook or at lakepowell.org.