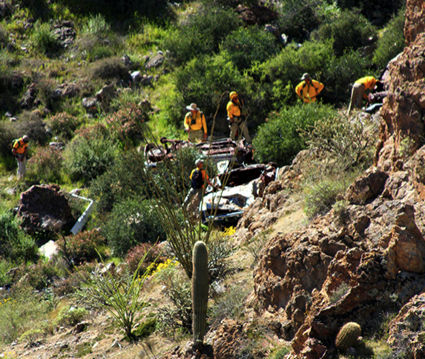 It has been a while since we have had a write up on Superstition Search and Rescue. This group of highly trained volunteers has accomplished an amazing amount of service to this community - aside from saving over a thousand lives in the past 15 years

Much has happened with this group in the last few years. SSAR is no longer the Wilderness First Responder for the Pinal County Sheriff's office. We have found that there are politics even in search and rescue.

We could no long enter the field in a safe and effective manner due to some decisions that were made by leadership. For the safety of the team, we had to stand down. We do now serve under the Apache Junction Sheriff's office.

We have started a cert team to further serve those in need when and if an urban crisis occurs. We have solved several cold cases - bringing closure to family and loved ones. We have located lost victims while assisting other counties.

A Sad Story of Jeff And Blue

On July 25, 2012, 58-year-old Jeff Block and his wolf/canine companion Blue went missing. SSAR was one of the local groups involved in the search for Block when his body was discovered in a canyon west of Show Low. It was discovered that Block had lost control of his Dodge Ram truck.

When Block did not show up at his home as planned, his brother Dan organized a search party with law enforcement and volunteer organizations to look for Jeff. Because of the area's rough terrain and the many wrecks littering the canyons, it became obvious that the search would be easier if all the older wrecks along the route were marked with a big "X."

Jeff Block and Blue were not found until Aug. 8, after a grueling two-week search. This tragic event motivated work to begin on "Project Blue," an effort to mark and catalog existing auto wrecks along area highways.

Hence, "Project Blue" was formed in 2012 as a non-profit organization dedicated to improving the search and rescue efforts for people in vehicle accidents in remote areas. Its mission is to expedite searches by visually marking old wrecks with a large blue X and cataloguing the location with GPS coordinates so search teams will know which wrecks to pass by.

The color blue was chosen because it is not often seen naturally in landscapes and Blue was the name of Jeff Block's dog.

Watch for the May/June issue of Western Outdoor Times/ Arizona Boating & Watersports and more on Superstition Search & Rescue. The next article will focus on their quad-copter "Eagle 1."