April Is One Of The Best Months To Fish

April and October can be the best months of the year to fish in Arizona. The water temperatures are ideal for waves of spawns. Access to high country lakes has opened the way for lunker holdovers. The flathead frenzy hardly left.

The buffet is laid out - Bass are spawning, especially with the April full moon; crappie should be spawning; flathead catfish are making camera lenses struggle to keep fish in frame; trout are being stocked all across the high country and anglers are catching holdovers as well as tasty stockers; channel catfish are abundant in the Community Fishing Program lakes.

For something different, head to lynx lake, where some anglers reportedly are having some decent action catching brown trout. Here's the tip: Try fishing a No. 18 or 20 with wooly bugger about 4 feet under a float with a 4-pound test leader.

Here's a quick fish story. On April 8, angler Jack Head of Phoenix was taking his wife and sister-in-law BOATING, fishing, and for a picnic. What he saw in the Agua Fria arm floating on the surface was a once-in-a-lifetime sight.

A monster striper, with a roughly 5-pound carp wedged in its mouth, was floating on the surface.

Head pulled in the fish and weighed it on his hand scale - the fish pinned his 30-pound maximum scale. Head said the fish was far more than 40 inches in length. The point is that these monster Stripers are in Lake Pleasant, and they're willing to eat a 5-pound carp. 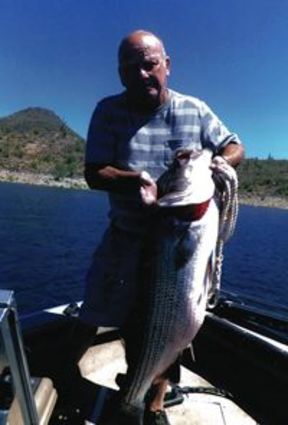 "I got him up with the gaff, then I handed the pole to my wife," Head said. "I had fish smell on my arms after I reached out and hugged him."

You never know what adventure awaits on Arizona waters. Go create yours.