Put A Spring In Your Step

Early Spring Hikes: Being able to hike year 'round is one of the many blessings of living in Arizona. In the winter, you hike in the desert; in the summer, you head for the mountains.

And now, if we've had decent winter rains, wildflowers will start to show up in mid-February and continue through the middle of June. They will be particularly abundant from mid-March through April, making hikes at that time of year almost unbelievably gorgeous.

For the three and a quarter million people who live in the Phoenix area, great hiking trails are easy to access – there are lots of trails within the city limits, and plenty of spacious parks and preserves just on the edge of town. Some of these trails can be so dearly loved that hiking is more like a morning commute: crowded and noisy.

Camelback Mountain trails and Piestewa Peak can be like that. But, nearby are trails that are lesser known but every bit as much fun. Do you like to climb? Maybe even to the point where you have to use your hands as well as your feet to scramble up a steep trail? Have I got a hike for you!

Lookout Mountain is part of the Phoenix Mountains Preserve and is located between Greenway and Bell roads around 16th Street. You can get to the Lookout Mountain Summit trail by taking Greenway Parkway to 16th Street, then take 16th Street north until it dead ends at the trailhead parking lot.

There are no tables or restrooms or water - so be prepared. The trail is only about a mile total, and it's an out-and-back trail. In the half-mile or so to the top you'll gain almost 500 feet of elevation.

The trail begins at the south end of the parking lot and you'll hike southwest for less than 200 yards to a post that marks the junction of the Summit Trail and the Circumference Trail. Take the left fork (trail 150).

You'll hike along an old road part of the way, and then zig-zag up the hill until you reach the saddle between the two peaks. If you go west you'll have a very short hike to the smaller peak.

Go east (left) and head up to the higher peak. At this point (and even before this, to a degree), the trail can get confusing. People have tried so many ways to get to the top that there are many paths worn into the mountain.

We took a difficult way up the first time because we didn't know which trail was the "real" trail, but on the way down, we realized that the best trail is marked by large white spots that someone has painted on the rocks. Still, you're going to have to use your hands now and then - the trail is narrow and steep and the rocks are loose.

Soon At The Top

This part of the climb is mercifully short and before you know it you'll be at the top. Your reward is a small flat area that gives you a glorious 360-degree view of the Valley of the Sun. I hope you haven't forgotten your camera! Be extra careful going back down - those loose rocks can make you lose your footing pretty easily.

If you'd rather skip the climbing and just take a nice walk around the mountain, the Circumference Trail is the one for you. This trail is a loop and is about 2.6 miles long.

You can find maps of this trail and many others at the City of Phoenix Web site at http://phoenix.gov/parks/trails/locations/north/hiking/index.html.

I must admit that I am partial to loop trails. On an out-and-back trail, you simply go back the same way you came, and I figure I've already seen that! It's true that you do notice things coming back that you didn't notice on the way out, but I still love loops.

One Of My Favorites

One of my favorites is the Treasure Loop Trail in the Superstitions. This loop trail is less than two and a half miles total and takes you right up to the roots of the Superstition Mountains. A little side hike will get you to the Praying Hands rocks.

The trail starts at the lost dutchman state park on the Apache Trail (Arizona Highway 88). Once you get to the park, pay the entry fee ($7.00 per car) and follow the road to the Cholla Day Use Area.

The trailhead is on the north side of the parking lot. There are restrooms, water and picnic tables in the Day Use Area.

The Treasure Loop Trail goes steadily uphill for the first mile or so. It's a very gentle slope until it intersects with Jacob's Cross-cut Trail, and then it's a little steeper but nothing major.

It's A Gorgeous Hike

It's a gorgeous hike that takes you straight toward the Superstitions, and, in fact, you get above some of the big rock formations. There are frequent benches if you need to catch your breath.

If you go early in the day, you'll be treated to the sight of the sun rising over the Superstitions. This also means that a large part of the trail will be in the shadow of the mountain, and it can be a bit chilly in the shade. Bring a sweater.

There are lots of opportunities for great photos on this trail. The mountains are simply giant vertical rocks at this point - pretty spectacular. And, here is something you may not know - the Superstition Mountains are actually the end result of the actions of three super-volcanoes. Some scientists believe that the Superstitions are actually the plug of an enormous volcano. 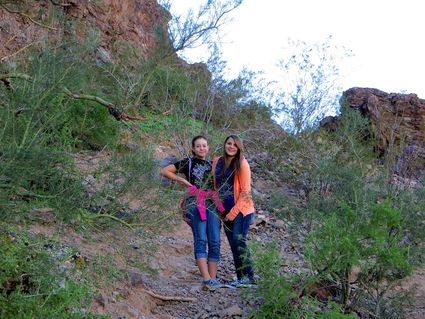 The Superstitions Are Beautiful

However they got there, the Superstitions are beautiful. If you get the chance to hike there, don't pass it up.

The Treasure Loop Trail is an easy hike. The only difficult parts are the steep bits and that is only because of loose gravel. Take a hiking stick and you'll be fine.

We took our dog and so did lots of other people we saw on the trail. It is a popular hike, but you'll still have plenty of time to yourself.

You can find more information, including maps, here: http://azstateparks.com/Parks/loDU/index.html