Get Ready For Some Good Catchin'

In addition to an incredible turnout for the kickoff fishing clinic and trout stocking at Pioneer Lake in Peoria, we received some great anglers reports and questions this week from those who emailed their stories to BFishing@AZGFD.gov. Keep 'em coming!

Oh, in case you missed it, see the full details of the new license structure. The new General Fishing licenses include bundled privileges: trout, two-pole fishing, Community Fishing privileges, and privileges for fishing Arizona's shared Colorado River waters with California and Nevada are now included in the price of the license (no need to buy separate stamps for those privileges).

Plus, licenses are now good for 365 days from the date of purchase instead of for just the calendar year. Buy a license online.

So let's get right to the good stuff.

I have a question. I want to take my grandson fishing with me at Lake Pleasant but we don't have a boat. Where are the best chances of catching something from the shore? Thanks. David S.

David – A good bet is the shoreline by the 10-lane boat ramp. Anglers have been known to have success catching Stripers there. Kyle from Pleasant Harbor Marina said that just two weeks ago, a man caught a 20-pound striper from one of the banks near the ramp on anchovies. Try chumming with anchovies and following the chum by baiting with a cut anchovy (free-line it). Thanks for the question, and good luck! -- Nick

Hello I am looking a visit to your state and am interested in the Prescott Area. Can you recommend a river or two that one might trout fish on in this area? Can you suggest an area in your state that has your best river fishing of trout as well? It's darn cold up here in Wisconsin. I need a break. Mike T.

Hi, Mike. Great question. And glad you're coming to Arizona to get warm - and fish! There isn't a wild trout fishery in the Prescott Area (if that's what you're looking for), but if you're coming during the spring, the weather is perfect to target the roundtail chub, which are better fighters than rainbow trout and often give an even better tug than smallmouth Bass. Plus, it is native to Arizona. Try the Upper Verde River Wildlife Area for some roundtail chubs. It's near Paulden, about 30-40 minutes north of Prescott. See information on this area, including a map. Although it's now catch-and-release-only, this can be some great fishing using spinners, crappie jigs or flies.

If you just want to catch trout, we stock rainbows during the winter. See the stocking schedule.

Finally, if you're feeling ambitious and are willing to drive a few hours, Lees Ferry in northern Arizona is one of the best clear-running tailwater fisheries in the country for catching wild rainbow trout. It's a can't-miss fishing destination that has some of the best red-rock canyon wall formations you'll ever see. See what I mean. Don't miss out.

And thanks for the question! -- Nick

Alex M. pulled out two trout in Green Valley Park in Payson. The weather was a little cold in the morning. The bait was Power Bait and he used 10-pound line.

Alex just got his $5 license (he's 11). He definitely earned that license fee! We were really excited that he could have taken home more than two trout, but we called it quits early since we had a really good day! Thanks!

This fish was caught at the new Pioneer Park in Peoria, Ariz.on Jan 7. It was accidentally caught on my fly rod. "Accidentally" meaning she was trying to untangle some line when the fish hit. About a pound, maybe a little more. Her biggest fish to date. Fish were on the fly about every cast. Fish was released unharmed. Have fun out there....

Charles S. with a Colorado River report from Picacho State Park to Imperial Dam: Water surface temps have been averaging around 52.4 degrees and fishing has been slow. But that doesn't mean that you cannot catch a decent largemouth here and there.

Peggy and I went out one day and threw chrome/blue/orange Rat-L-Traps all day, and while we only bagged only three fish that particular day, one weighed at 3.9 pounds and made it all worth it.

The fish in the picture wasn't anymore photogenic than I look in the picture, but after cranking miles of shoreline that was all I could muster. But I assure you that I was happy inside. Water levels had been low to OK for the last 10 days, with a noticeable rise in water levels after the first of the year.

PEORIA, Ariz. - The Community Fishing Program kickoff event at Pioneer Lake was huge! The scout den leader of Cub Scout pack 618, rod in hand on Saturday, Jan. 4 during the first rainbow trout stocking and fishing clinic at Peoria's Pioneer Lake, turned to a cluster of eager young anglers, then swayed into a back-cast.

"The main rule," Cal Carlson said, "is look and see who's behind you."

Of the estimated three hundred anglers who encircled the shoreline at the recently opened Pioneer Community Park, this group of scouts had perhaps the most success catching the rainbow trout that the Arizona Game and Fish Department had stocked the night prior.

From Jan. 6-11, the lake that is marked by its spewing fountain is being stocked with incentive trout. The lake will be stocked every other week.

The Department-hosted event included a fishing clinic, loaner rods and bait, and kicked off the first of 15 new waters that are being added to the Community Fishing Program. See an http://www.azcentral.com video from the event.

Carlson cast a chunk of Power Bait and handed the rod to six-year-old Caden Chantel. For minutes, the boy was fixed on the red-and-white bobber some 15 feet away, hardly flinching in his tiny fold-out seat.

Then he caught a trout of about 12 inches, one of eight the group of scouts had caught by 10 a.m. – just one hour into the event.

The 81-acre park on 8755 No. 83rd Ave. opened in September with a particularly posh playground area that includes swing sets and a splash ground. The park also boasts four multipurpose ball fields, a dog park, picnic ramadas with grills, and a Heritage Garden for small events.

"This area needed a lake like this, big time," said Al Schmidt of Surprise. "Because the closest one was in Surprise and Rio Vista is a pond, which means the limit is two trout (and catfish)."

For more information on the CFP, including maps, fish stocking schedules, regulations and fishing tips, pick up a new and expanded 2014 Community Fishing Guidebook that is available at more than 300 license dealer locations and Game And Fish offices. The guidebooks are free.

Have a fond memory? An exciting experience? A funny situation? Or, just a special day on the water with family and friends enjoying Arizona's amazing outdoors? Email your story to bfishing@azgfd.gov, and we may share it with others online, in print, or on television.

In the first video segment of "Fish Stories," we bring you "Rylee's First Fish." Shot at Show Low Lake, she described her first fish – see this heart-warming, and hilarious, video.

Stay tuned for future additions of "Fish Stories," which will frequently appear here in print, online or on television.

Plus-size rainbow trout - most weighing 1-3 pounds but up to 8 pounds - have just been stocked into all of the Community Fishing Program waters. (All except the CFP waters that are yet to be included in the ongoing expansion.) 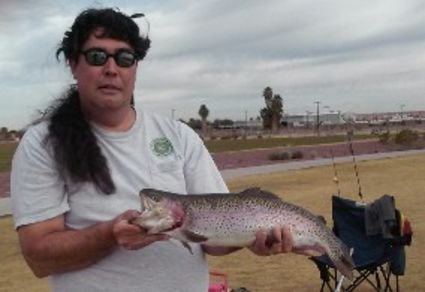