The Big show On And Off The Water

The Lake Havasu Boat Show has an established 22-year tradition of success in the recreational BOATING industry, started by members of the Lake Havasu Marine Association. Originally conceived as a local boat show to promote sales at Lake Havasu City based marine businesses, today, the Lake Havasu Boat Show has grown to become one of the premier boat shows in the Southwest, attracting as many as fifty different boat brands (including fishing boats, pontoons, family runabouts, wakeboard/ski boats, deckboats, PWCs, and the hottest high performance sportboats in the market) and hundreds of BOATING accessory products, marine engines, trailers and services displays.

In 2014, the 23rd Annual Lake Havasu Boat Show is scheduled for Friday, Saturday and Sunday, April 11-13. "It's still a boat show, first and foremost, but we've added a lot of additional entertainment value for the general public," remarked boat show producer Bob Brown. "The 2014 Boat Show will play host to three special attractions on Saturday and Sunday starting with the fastest water ski racers in the country competing in side-by-side competition at speeds up to 100 miles an hour. Also on Saturday and Sunday is the 3rd Annual Legends by the Lake Car Show presented by the London Bridge Yacht Club featuring up to seventy-five beautifully restored street rods, muscle cars and classics. And for chili lovers, there's an ICS sanctioned chili cook-off and salsa competition with more than two dozen of the best chili chefs in the Southwest vying for prizes and cash awards over $2,500 for the best chili and salsa recipes. All proceeds from the chili cook-off go to benefit the Lake Havasu High School Athletic Booster Club, and tasting kits will be made available to the general public at nominal charge."

Fans of offshore powerboat racing will also have an opportunity to see "miss geico" the reigning 2013 SBI Offshore Unlimited Class World Champion race boat. This will be the first-ever appearance of the "miss geico" race team in the Southwest. And if you've never seen it in person, the amazing WaterCar, recently featured on an episode of ABC TV's "The Bachelor" will be front and center shoreside demonstrating its remarkable performance capabilities on-land and in-the-water. The WaterCar recently made a successful open ocean channel crossing between Newport Harbor and Catalina Island in a little more than an hour. 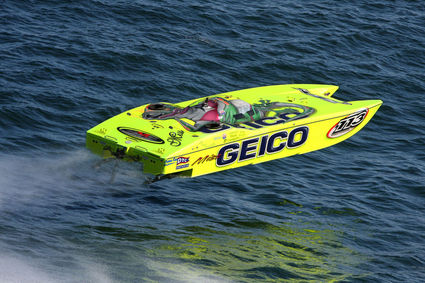 The 2014 Lake Havasu Boat Show will be open to the public from noon to 6pm on Friday, April 11, 9am to 6pm on Saturday, April 12 and from 9am to 3pm on Sunday, April 13. Admission is only $3.00 per adult and kids 6 and under are free, and parking is also free. Food courts and beer gardens with live entertainment are also on-site. The Lake Havasu Boat Show is located on London Bridge Road, at the Windsor 4 special event area between the Hampton Inn and Motel 6. For more boat show information, please visit the official website at: http://www.lakehavasuboatshow.com.

Are you into BBQ cook-off competitions? Would you like to help organize a "backyard BBQ" contest at the boat show on Sunday, April 13 for maybe 8 to 10 teams? If you know how to organize this type of event and would like to help please contact Bob Brown (Media Directions) at (951) 501-0210 or info@lakehavasuboatshow.com.