As part of a conservation program for the endangered Mount Graham Red Squirrel, the Arizona Game and Fish Department, U.S. Forest Service and U.S. Fish and Wildlife Service conducted an annual squirrel survey and estimated approximately 272 animals in the Pinaleño Mountains in southeastern Arizona.

This year's survey shows an increase of 59 squirrels over the 2012 estimate of 213 squirrels.

"After coming off our lowest population count ever last year, this jump in numbers is certainly encouraging," says Tim Snow, nongame specialist for the Arizona Game and Fish Department. "The recovery team speculates that better cone crops the last two years may have contributed to the increase in squirrel numbers, but it's hard to say with certainty since small mammal populations fluctuate so much."

The Red Squirrel survey is conducted each fall by visiting a random sample of known middens (areas where red squirrels store or cache their cones).

Mount Graham red squirrels live only in the upper elevation conifer forests of the Pinaleño Mountains and feed primarily on conifer seeds. Females produce two to seven young per year. The species was declared endangered in 1987. 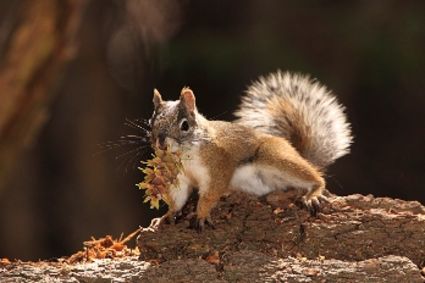 The Mount Graham Red Squirrel population spiked to around 550 animals in the late 1990s, but typically ranges between 200 and 300 individuals. Habitat losses caused by fire and insect infestations and poor cone crops caused by drought are considered primary factors influencing population size.

Biologists continue to explore new ways to conserve the species, including habitat improvements, squirrel research and consideration of a pilot captive breeding program.

Conservation of the species is guided by the Mount Graham Red Squirrel Recovery Team, a partnership that includes the Coronado National Forest, Game And Fish, U.S. Fish and Wildlife Service, University of Arizona, Native American tribes and others.