The Past Predicts The Future For Powell Anglers 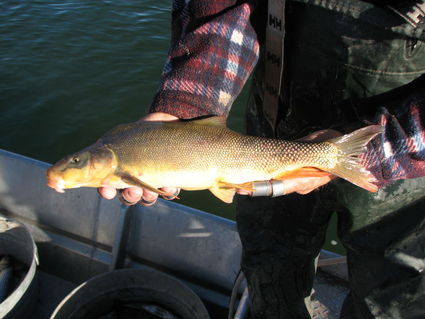 Current conditions at Lake Powell during 2013 were difficult for all fish populations because of declining lake levels resulting in habitat loss. Shoreline vegetation, which had been inundated in recent years, was desiccated in 2013. Loss of brushy habitat resulted in lower than normal production of bass, crappie and bluegills.

Lack of brush also limited the survival of both gizzard and threadfin Shad produced in 2013. Low forage made for difficult circumstances for adult fish of all species as they foraged for food all year long. Striped bass were at a population peak going into 2013 and found difficulty finding adequate food in their deep water habitat where forced to live after they mature.

With these adversities facing each fish species, it would seem that annual gill net results would reflect the hard times and result in lower numbers of fish captured at each of the four stations sampled. That was generally true, but there were enough bright spots to provide great hope for strong fish populations being present in future years.

Gizzard and threadfin Shad are the main forage-fish staples in the lake. Threadfin are open-water fish and not well sampled by shoreline net sets. gizzard shad adults live along the shoreline and are depicted perfectly by net samples.

They are the most abundant fish caught in nets each year. Therefore, only gizzard shad are mentioned during a discussion of netting results.

Adult gizzard shad numbers caught in our nets peaked in 2004 at 700 and have fluctuated each year since. The 383 Shad caught this year was the lowest number reported since 2004 but it was not low enough to be statistically significant.

On average, gizzard shad numbers were a bit lower than usual but there will be plenty of Shad next spring to provide multiple spawns and produce a strong year class of Shad for game fish to eat.

Stripers were the second most abundant species caught with a total of 344 fish caught lakewide. This was a banner year for angler-caught fish as countless striped bass were taken on bait in deep water of the main channel throughout the year.

I thank the anglers for doing their part this year. There is no limit on striped bass, so in years when adult Stripers are hungry and declining in health, they can be harvested at will to reduce competition with Stripers left in the water. This only happens about once per decade.

We cannot confirm that since our creel census survey is only conducted every third year and was last performed in 2012. In that year almost 740,000 Stripers were harvested.

What we do know is that striped bass caught in nets were mostly strong, healthy, young fish. Very few of the old malnourished adults were captured.

Some of the older fish have died but very few were seen on the lake bottom as we traveled around the lake. Angler harvest is a major factor in reducing the adult striper population.

The unlimited harvest management plan has proven effective once more. In spring 2014, a young 2-pound striped bass population will grow quickly to as soon as gizzard shad spawn and young Shad become available. Then young Stripers will grow to 3-pounds by the end of the summer and provide exciting fishing for larger fish.

The old thin fish will be gone as the population adjustment will be completed over winter of 2013.

Largemouth are not caught well in gill nets because they tend to hide in vegetation and have only limited movement at night when most fish are caught. We only caught a total of 9 Largemouth Bass in all nets combined.

Bass are dependent on brush to replenish their population. Terrestrial vegetation is currently growing along the shoreline and exists at an elevation above 3,612 MSL. If there is a wet winter and lake level rises above the existing brush line in spring 2014 Largemouth Bass will rebound.

If the drought continues and lake level does not cover brush, bass will have to wait until conditions are right to recover.

Smallmouth do better in rocky habitat which is why they were stocked in Lake Powell. Over the length of the lake, 74 smallmouth bass were netted. Bass are caught less often than Stripers because they move less and tend to stay on one stretch of shoreline instead of cruising the shoreline as Stripers do.

It is not wise to measure fish abundance by comparing catch rate of different species but rather year-to-year catch rate of the same species. Most species were caught at a lower rate in 2013 but again, the difference in catch of smallmouth is not statistically significant considering the ups and downs of bass caught over the past 10 years.

Walleye were virtually missing in action at most net-sampling locations while 115 of the 125 fish total were caught at Good Hope Bay. Shad are more abundant near the inflowing Colorado River.

We have found over the years that the walleye-limiting factor is Shad abundance. If Shad numbers are high at a certain spot during spring, then young walleye survive in large numbers at that spot. Without Shad, walleye numbers are low.

Over most of the lake Shad were scarce and walleye did not survive in large numbers. But, the inflow area always has more Shad and, therefore, more walleye.

The netting report is concluded with optimism that fish populations in Lake Powell will be strong in 2014. The dominant species will be gizzard shad, striped bass and smallmouth bass.

Locally, there will be a few spots where walleye, Largemouth Bass and crappie will be found but these locations will be the exception rather than the rule. Lake Powell is reverting back to the days before abundant shoreline vegetation. Fishing conditions in 2014 will be similar to those found from 1996-2004.

I don't know about you, but I have fond memories of fishing in those conditions and am optimistic about our chances for finding great fishing success in the coming year. Expect to mimic fishing techniques used in 2013 with one exception.

Striper fishing with bait will be much less successful while reaction baits, trolled and cast will be better. Smallmouth bass will love plastic crawdad imitations bounced on bottom. Walleye will be easy to catch in the northern lake during the month of May.