Now Is One Of The Best Times To Fish Arizona

When trout are more active. it's sometimes better to use lures rather than bait, especially inline spinners such as Mepps, Rooster Tails and the like.

Casting spoons, such as KastMasters, can sometimes be downright lethal.

Also try rainbow-colored Rapalas. The larger, more voracious trout will often feed on the smaller ones.

The window of sunlight that blasts our waters is increasingly short-lived, leading to the first hints of fall fishing conditions.

First, before we consider conditions and what's biting, let's take a moment to recognize the foundations of Wildlife management. Good a time as any because National Hunting and Fish Day has just been observed.

President Nixon, on May 2, 1972, signed the first proclamation of National Hunting And Fishing Day, writing, "I urge all citizens to join with outdoor sportsmen in the wise use of our natural resources and in ensuring their proper management for the benefit of future generations."

And with that, we recognize the hunters and anglers who, more than 100 years ago, were the most boisterous supporters of conservation and scientific Wildlife management. They were led by fellow sportsman, President Theodore Roosevelt.

With the falling water temperatures, Shad in desert lakes are congregating in shallow waters, often in the backs of coves, where Largemouth Bass come to sate themselves. The fall bite has only just begun. There is less boat traffic, fewer anglers, and yet better fishing and refreshing air temperatures — an angler’s paradise.

It’s a transition phase in many senses. The final summer trout stockings are taking place at Bear Canyon, Show Low and Woods Canyon.

bull elk should be calling like crazy. A great fall spot for elk calling is Knoll Lake on the Mogollon Rim, which not only is a nice trout lake, it’s a scenic drive there along the famous Rim Road. Soon, the aspens should be showing off a new, fall wardrobe.

In the Urban Fishing Program, waters located in the greater Phoenix and Tucson areas, Mr. Whiskers is being stocked once again. Seven tons of them, actually, were stocked through Sept. 21. catfish daily bag limits are four fish at the urban lakes or two fish at urban ponds

As The Season Changes

With the falling daytime water temperatures, fish are more likely than previous weeks to feed during the sun’s showing, and so expect the nighttime bite to slow.

For the most part, the dropshot will become less effective, with crankbaits and jerk baits producing a better bite. This is the time of the year when the fishing can be on one day, off another, due to the finicky nature of Shad boils.

At Saguaro and Canyon lakes, targeting morning Shad boils with jerk baits has been the best option. At Apache, dropshots and Texas rigs still have produced the most fish for some anglers. The striper bite is hot at Lake Pleasant.

And, attention crappie anglers: Some great reports have been coming out of Roosevelt Lake.

It’s one of the best times of the year to fish. Keep the fishing heritage thriving for future generations. To do so, anglers only have to fish, and teach kids how to fish. What a fun way to do some good.

As a reminder, the Arizona Game and Fish Commission approved 12 amendments to Commission Order 40 (the fishing regulations) at its Sept. 7 meeting in Show Low. The changes will take effect on Jan. 1, 2014.

The Silver Creek seasonal trout fishery near Show Low opened up Oct. 1. The catch-and-release season runs through March 31. trout from this fishery must be immediately released unharmed — no trout may be kept. It is artificial fly and lure only with single, barbless hooks. 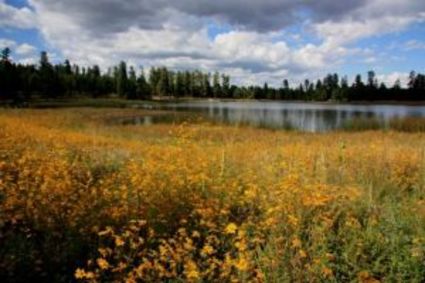 Silver Creek is spring fed and stays at a constant temperature. Because it is not subject to freezing, it provides anglers ideal wintertime, high-country trout stream angling. It is located five miles east of Show Low on U.S. Route 60. Turn north off Highway 60 onto Bourdon Ranch Road for five miles to Hatchery Road. Then head eat on Hatchery Road 1 mile to the Silver Creek Hatchery, park in the parking lot, and follow the signs to the creek.

A new fishing and hunting license structure and fees will go into effect in 2014. The new licenses will be available for purchase beginning Jan. 1, 2014. The new Fishing License includes bundled privileges. For more information, visit http://www.azgfd.gov/eservices/licenses_newFees.shtml